Today was my son William’s swimming championship meet. I felt like I was going back in time to the days when I swam, except this time I was my mother! I woke up at 5:30AM. I packed the bags. I started the car up to make it warm and cozy. I made breakfast for William and had it all bagged and ready to go. I got dressed and packed the car. And then I woke William up around 6:30AM to head out for the swim meet. It was just the two of us today. The meet was called the SENECY Championships and it was at Bridgewater State University in Massachusetts, which is about an hour from our house.

I have to be honest, I LOVED the morning routine. It was like going “home” for me and it felt very comfortable and very familiar, but it was all new to my William. He’s never “traveled” to a meet before, and the whole way to the meet he kept saying to me, “I’m a little nervous, is that OK?”

Ahh… the nerves. That’s a good thing. I knew that meant he was ready to rock and roll.

But there’s just something about watching him swim that I love. He’s good at it, he really is. And I’m not just trying to be one of those mom’s when I say that, he’s good at it… and he loves it, and that’s all that matters to me. As I watched him today and then called Matt to report on how he was doing, I said to Matt, “I just really love watching him swim. I love it.” 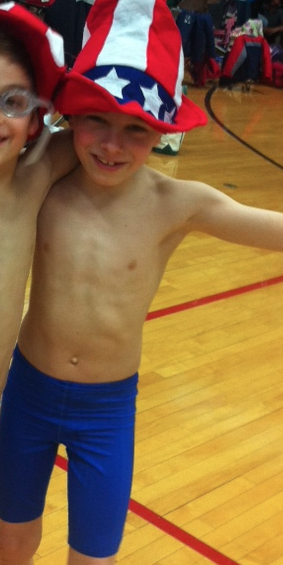 1) He doesn’t know any of the New England cuts. Everyone else on deck – the coaches, the parents, the older kids… they all know the cuts, but the little guys – they aren’t as worried about them. William made it today “officially” in his backstroke and missed it by 3 tenths of a second in his butterfly, and it didn’t bother him. He just had fun swimming, and I love that.

2) You got necklaces today for swimming your race – Mardi Gras necklaces. The smile from ear to ear because he got a necklace was priceless. Never mind the fact that someone gave him 2 necklaces for a race.

3) Every time he finishes a race, he always shakes hands with the kids next to him. I’ve never told him to do it, but I’ve always thought it was the kindest thing.

4) I love watching the build up to the race. I leave him at the bullpen with the other kids, and he literally is joking and laughing and smiling with everyone up until the block… then it’s like he’s a new kid. He puts those goggles on and he just focuses. I don’t know where he’s “learned” that, but it’s really cool to see this little transformation in a 7 year old.

5) Right before he’s about to put those goggles on, he looks up and waves at us. He did it today a bunch of times while he was walking to the block and it warmed my heart. He loves to know we’re there watching and I love that he still needs us… even though he’s a “big” 7 year old.