It was posted by a blogger named Jen about her cousin’s little boy, Cole.

I’m copying and pasting her post, along with it’s link to her blog. I URGE you to take the time today to send Cole a card. First thing this morning I sent him an e-card. TODAY’s his brithday… it would be wonderful to have him showered with birthday love from around the country. 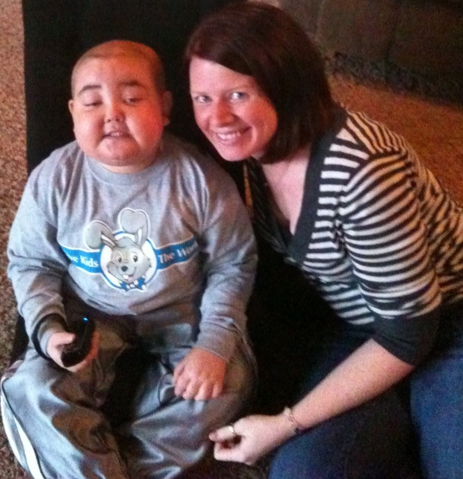 Some of you may already know about Cole. He was diagnosed with ALL (acute lymphatic leukemia) in October of 2010. He has fought a tremendously difficult battle over the past year and I’ve seen more courage from this little boy than I ever thought possible.

This past October, it was decided that his fight had reached its end. The cancer was too strong and his little body just couldn’t take anymore. In November, his doctors said that he likely wouldn’t make it to see Christmas and yet, next Monday, January 9th, he will celebrate his 5th birthday.

It’s amazing, really, the power of hope and determination. Cole is seeing holidays and celebrations that even the professionals in his life didn’t think he’d see.

As I’m sure you can imagine, Cole’s family wants to give him an extra special celebration when he blows out those candles this year. It’s a precious milestone, this one. If you know me at all, you know that I’m not the type to ask for help, even when I need it. But, for this little amazing kid, I would ask for just about anything. And it isn’t much, really, just a small token. But if you know any 5-year-olds, you know how special small token can make them feel.

So, here’s what I am asking. I am trying to get as many people as possible to send him a birthday card this year. I’ve set up an email account WishesForCole(at)gmail(dot)com so he can receive e-cards and email wishes. And he can also receive cards by mail at his PO box listed below:

Take the Time Today to Send Cole Dieckman a Birthday Card ON His Birthday was last modified: July 19th, 2017 by Audrey McClelland