Alexander was born into a family with an older brother that was exactly 12 months older than him.  By the time Alexander turned 2 years old, he had a 6 month old baby brother and I was pregnant with his littlest brother.  Long story short, this kid has never known what it’s like to be home… alone.

Alexander does afternoon kindergarten, so for the first time ever — he’s with me in the mornings without his brothers.  It’s the first time – ever – that 1) I’ve ever been alone with one of the boys 2) Alexander has ever been home without any brothers… 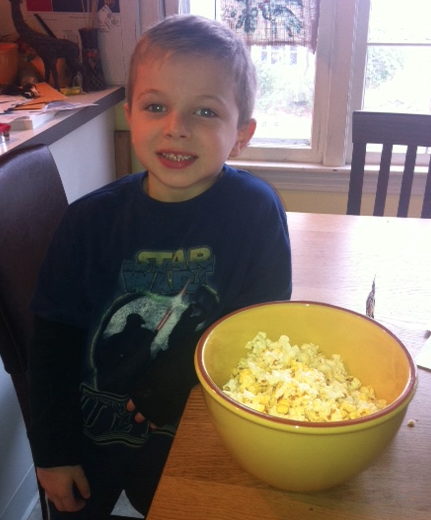 10 Things I Love About Having Alex Home in the Mornings:

1) I love listening to him talk to himself while he plays XBOX. “Go Alex! That’s right!” And he even does a little dance.

3) I’ll work and he’ll sit next to me “working,” too.  He’ll draw pictures for his room or for his teachers.

4) He’s “Mr. Bigshot” helping me get his younger brothers dressed and out the door on time. He’ll get Henry’s shoes for me or Ben’s coat… it’s very cute.

5) He loves to do errands with me… every morning he’ll say, “Mom – do we need to go anywhere today?” And if I say no (which is often), I can tell he’s upset. He loves just being out and about by himself with me.

8) I pretend I can’t hear him dribbling his basketball in the kitchen in the mornings, so he gets a kick out of that. When everyone else is home — that has to STOP.

9) The fridge is miraculously closed throughout the mornings.

10) It’s a bonding time that we’ve never had before, and I it’s important to us… I have a little thing that I do with all my guys, I whisper in their ear that “you’re my best friend, always.” I can tell that Alexander loves this when he’s home with me in the morning.

And again… there’s a quiet in the house I’m not used to when it’s just Alex.

Daily Diary: 10 Things I Love About Having Alex Home in the Mornings was last modified: December 21st, 2011 by admin
SHOWHIDE Comments (0)

Daily Diary: 10 Things I Love About Having Alex Home in the Mornings was last modified: December 21st, 2011 by admin