I wonder what I was thinking here…

I wonder if I knew back then that I would love words and babies and dogs and high heels and lobster salad.

I wonder if I knew back then that I would love a good challenge.

I wonder if I knew back then that faith, hope, charity and prayer would steer my life.

I wonder if I knew back then that I would want to write a rap song some day.

Screech to a halt.

Side story.  I began teaching high school English and Reading to disadvantaged kids back in the 70’s.  I was young, fresh out of college, enthusiastic and green (as in inexperienced, with a lot of growing and learning to come).  Over the next 30 years, I would not only love my job, but I would learn more life’s lessons from my students than I ever could have imagined… and I think that my students understood and grasped a love of learning from me.  I hope they did.

I don’t know how many times in my teaching and in my life that I’ve addressed challenges with, “You can do anything you want.” Hundreds.  Thousands.  Millions of times, maybe.

Maybe every single day I said that to one or two or ten kids, including my own kids.

But the time that stands out the most was in the Fall of 2002.

I had 14 kids in my 1st period Reading class in a classroom that was designed for 10 kids, tops.  These kids were active and verbose, they didn’t particularly like to read… and were wonderfully fun.

One day early in the year, one young man was agitated about Reading and began commiserating with his classmates about what a waste of time school and books… and Reading, in particular, was.

That’s when I took out my YOU CAN DO ANYTHING YOU WANT speech, telling him that READING would only help his dream of accomplishing anything he wanted to do.

The young man looked at me, smiled, and said, “YOU can’t do anything YOU want just ‘cuz you can READ.”

We went back and forth with some of the things I could or could not do, and finally he announced, “YOU can’t write a rap song.”   His 13 classmates readily agreed.

The young man smiled again.  “Maybe you can READ. But YOU can’t write a rap song.  You gotta live it to do it.”

Hmmmmmm.  The discussion quickly went to my age, my gender and my race.

I told him that in spite of the odds and the other things, I could write a rap song.  I had plenty of things to say because I had been through a lot of stuff that maybe didn’t show in my age, my gender, my race… or on my face.

And every once-in-awhile I’d say to that class, “I’m going to write a rap song some day.” 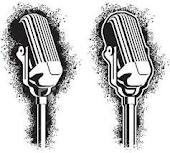 And they’d smile at me… a nice no way, ever kind of smile.

I wonder if that little girl in the photo turning 1 year old already knew the ideas, images, words, faith, hopes, goals, prayers and challenges that would inhabit the same mind turning 59?

Hmmmmmm.  What about a microphone?

I retired from teaching in the spring of 2003.

But I’ve never quite shaken being told that I can’t write a rap song.

I can do anything I want… and I’ve lived enough to have something to say.

There’s no time limit on a challenge!