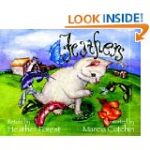 The story FEATHERS is a traditional Eastern Europe folktale brought to vivid life in the words and illustrations of Heather Forest & Marcia Cutchin.

There is a woman in the story whose tongue is sharp and unkind and started a rumor.  Unremorseful of her deed, a rabbi sends her on a mission to release a pillow-ful of feathers and then return with each one.

The wisdom of the story FEATHERS is its lesson, but the forever symbol is the birds’ FEATHERS.

We learn that birds’ feathers are not so easy to retrieve once they soar.

But what is the real tweet-tweet on birds’ feathers in real-life?  Here are a few little tidbits to pass along to your kids and grandkids to combine literature and life:

– A bird’s feathers are called its plumage.  (Plumage derives from the word plume, meaning feather.)

– Feathers play a very important role in the life of a bird.  Feathers evolved from reptilian scales and birds still have scales in the lower parts of their legs and feet.

–  Many female birds are attracted to the color and size of a male’s feathers.

– A bird’s good health is often evident in its plumage.

– Feathers called natal down are often a bird’s first feathers.

– Birds preen their feathers to keep them clean.  (Preening is smoothing and cleaning feathers with its beak.)

– The colors of a bird’s feathers are their built-in camouflage from predators.  Some birds change plumage by season.

– Feathers, of course, allow a bird to fly, glide or hover.  The shape of a feather is very important to the species of the bird.

– A bird’s feathers can change color due to molting, sun-bleaching, illness or staining.  (Molting is shedding feathers that will be replaced by new growth.)

– Feathers become worn and are replaced by a bird once or twice a year.  These feathers may be seen flying about.

– A bird is often able to establish territorial dominance through the color of its feathers… the brighter, the stronger.

– Countershading is a feather color pattern of a dark back and light underparts.  This makes a bird difficult to see at a distance and protects it from predators.

– The largest feathers are called contour feathers. These give the bird its shape and color.

Reading the story Feathers with your kids and grandkids, with knowledge of Feathers in real-life, gives you so much to discuss… and your kids so much to think about as they embrace the literature.

Feathers gives us a great opportunity to talk with our kids about our words… and how carefully we must use them. Unkind and unwise words are as difficult to take back as a pillow-ful of feathers as they take off toward the sky and scatter with the wind.

Just as feathers are the most important part of a bird’s anatomy, so are our words a great part of who we are… and sometimes we just cannot take our words back any more than we can collect that pillow-ful of FEATHERS. 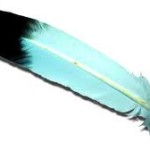 Combing literature and real-life is a true gift!

Join me here each day in August for AUGUST TWEET-TWEETS on 365 Days of Literacy for Kids! A little fun, a little learning and a bit of “tweet-tweet”!