As we all know, juggling family, friends, career, housework, exercise – and everything else in our lives – is a challenge. Sometimes there are just too many balls up in the air and one (or more) things go on the back burner.

For the last few months, I have been a bit sporadic with my fitness routine. Yes, a few injuries have gotten in the way of me exercising as much as I’d like, but at times my efforts have just been more focused on other things.

However, there’s always the opportunity to re-prioritize, and that’s what I’ve been doing lately. Now that the weather is finally getting nicer and more conducive to actually enjoying outdoor activities, I’ve been getting out on my bike and even trying to get some walk/runs in (I’m trying to ease back into all running so as to help heal my arch tendonitis.)

I also began really following Rhode Island fitness trends, deals and news a few months ago, and keeping track of everything on a Rhody Fitness Facebook Page and Twitter profile, which has kept me entrenched in the Rhody Fitness scene.

Keeping my ear to the ground on the fitness goings-on in the state led me to finding out about a group ride happening on Friday, May 13 at the new Eastern Mountain Sports location in Warwick, RI. I was so game!

First of all, I’m a big fan of EMS and frequented the store in the old location, the Garden City Shopping Plaza in Cranston, RI (near where I used to live). I was also psyched to get to know the people working at the new EMS, as well as other cyclists in the area. It’s always great to find new people with whom to ride. 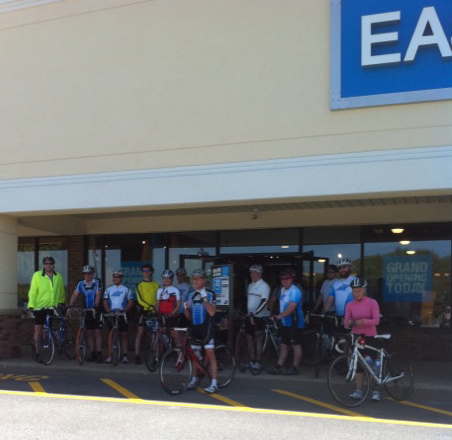 There were about 12 cyclists in the group, many of whom were part of the EMS executive team (including CEO Will Manzer), and it was a beautiful afternoon, just perfect for a ride. We took off from the Warwick store and spent some time on the roads around Warwick, Cranston, Coventry and West Warwick (read: lots of hills). 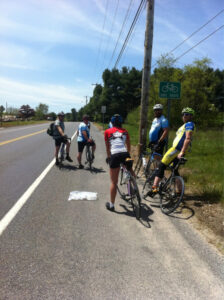 Two years ago when I was really in the best shape of my life, training like a fiend for my first marathon and then my first Half Ironman, I would have been able to tackle those hills like a champ. But yesterday? Well, let’s just say I it was quite a workout. And you know what? It was probably just what I needed. As difficult as it was to not be at the front of the pack, it made me want to work harder to get there. I feel like I held my own with the other riders, but I know I can work harder to get myself in better riding shape. Luckily, it’s only the start of the season!

Anyway, I wanted to thank EMS for a great ride. From my conversations with the folks on the ride, it seems that EMS in Warwick will be planning group rides and other events to take place at their store. I will be sure to keep everyone informed! (RhodyFitness.com is being developed, but that is where the events will be listed once the site is really up and running. Until then, keep following along on Facebook and Twitter!)