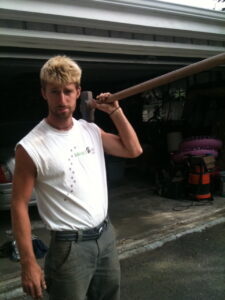 … Brian is a total romantic.

And that is the reason I already have the wedding band I will wear when we get married – and I actually have been wearing it for over a year.

You see, when Brian was a young chap of about 8 years old, he was vacationing in Miami with his family and he found a ring. It was a simple white gold band, and in his sentimental little heart he thought it would be the perfect thing to give to the girl he wanted to marry someday.

And so he kept it… for about 17 years. Then last May he gave it to me. He didn’t call it a “promise ring,” per se, but in a way that’s what it was. It wasn’t an engagement ring… it wasn’t time for a proposal just yet… but it was a way to let me know that I was the one he had saved the ring for all those years.

I have worn the ring since he gave it to me (prompting many questions from people as to the meaning behind it, as I usually wore it on my ring finger), and then a few weeks ago, before Brian proposed, he suggested that I use the ring as my wedding band when we got married.

I liked the idea. I had been wondering where I would wear it when Brian and I did get engaged and then married, so it was a perfect solution. 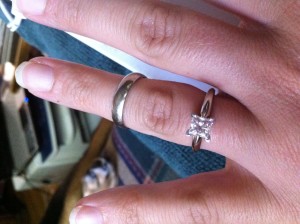 Then my mom and I were shopping in local jewelry and gift shop, Muse, for a new wedding band for my dad (his broke after nearly 35 years!). When I was telling the owner that I planned to wear the ring as my wedding band, she suggested adding diamond chips to it.

I loved this idea because the ring means so much to both me and Brian, and this will allow me take it from being a “promise ring” of sorts to a beautiful wedding ring.

(And thanks to my friend, Krissy, I have an idea what I want it to look like – this Tiffany ring.) 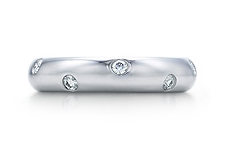 So that takes care of my wedding band… now we just have to figure out the rest of the wedding plans!

From a promise ring to a wedding band was last modified: July 20th, 2017 by Jane Couto Govednik
SHOWHIDE Comments (11)

From a promise ring to a wedding band was last modified: July 20th, 2017 by Jane Couto Govednik