I always get nervous around this time of year because I know that summertime brings big-time diaper rash for my guys. This summer I’m particularly focused on my only diaper wearing little man, Henry. My 4 sons have the most sensitive skin in the world, and I have to admit, I think they get it from me. My mother has told me I was exactly the same way when I was a diaper-wearing little girl. There’s just something about the heat, the sweat and the “Couto” skin.

I will never forget William’s first summer. He was 9 months old in June of 2005. He LOVED the beach and the pool and he would walk around (yup, walking at 9 months) like he was the King of the Beach and/or pool. It was the cutest thing known to mankind!

But with that summer came my first go-around with diaper rash. It was horrible. I felt so badly for William. His little bummie was fireworks red and (obviously) uncomfortable. My heart ached for him and I had not even a clue as to what to do. The hotter it got, the worst his little bum got, and I was changing his diaper and swim diapers around the clock! I used every cream known to man… some helped, some didn’t and some I refused to put on him because they seemed too harsh. It was a tough first summer.

What I didn’t know at that point was that it wouldn’t end with William. There would be Alexander, then Benjamin and then Henry.

The good news with this summer, I’m ready for it, thanks to Puristics and Puristics’ Zinc Oxide Diaper Rash Cream
. We’re armed and ready for anything this summer… right, Henry? 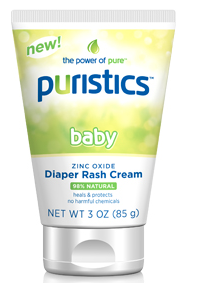 What about Purisitics that is so amazing?

Developed with zinc oxide, the #1 pediatrician-recommended ingredient for the treatment of diaper rash. Specially micronized zinc oxide allows the cream to go on silky smooth but still provide an excellent barrier to moisture and wetness. Also features an essential oil complex of eucalyptus and rosewood oils for a calming and soothing experience for your baby with every diaper change.

We’ve been using the Puristics Diaper Rash Cream throughout the winter and spring on Henry, and it’s been such a saving grace for us. You remember when Henry had the stomach flu, and that inflamed his diaper rash… the Puristics was INCREDIBLE. It soothed and it worked. I know this summer I have the best of the best for my little Henry, and I love how 98% of the ingredients are natural. I know nothing is going on Henry’s skin that is too harsh and too strong for him. It’s also pediatrician tested and hypoallergenic, something I always look for when getting products for my sons’ skin and bodies.

So summertime fun, bring it on! Henry’s armed and ready!

1. There are NO scary chemicals in the products. Seeing my sons’ skin so sensitive as it was, I was extremely nervous about putting anything on their skin. I would read every single package and then research every ingredient I didn’t know anything about. I’m honest when I say that many ingredients frightened me.
2. When I read about Puristics’ founder M’Lou, I just felt so connected to her. She wanted to create products that are safe and pure for people – plain and simple. I love that she’s a mom and I love that she cares about what is being put on store shelves… and on skin.
3. After trying Puristics products on my sons, I saw results. Plain and simply remarkable!

If you have any questions, let me know. I’m very passionate about what goes on my children, so I would love to answer any questions or lead you in the right direction.

Disclosure: I am working as a spokesperson for Puristics, but my experiences and opinions are my own and I stand by them!