I’ve talked a bit before about how when I write about the Pure Protection products from Puristics, I’m pretty much speaking to a particular audience: women. Sure, men with girlfriends, wives and/or daughters might (and probably should) have some interest – if only to say, “Honey, you may want to look into these products” – but I’m willing to bet that it’s mostly women reading these posts.

But it’s not because the posts are in any way offensive. It’s because typically men don’t want to hear/know/associate much with periods. They know it comes once a month. They know their significant others will probably be hormonal because of it. They know it’s a normal part of a woman’s life. But that’s really all they need or want to know. Most of the time, when they know that time of the month has arrived, nothing more needs to be discussed about it. It’s the red elephant in the room, if you will.

And yet even though we, as women, are the ones who deal with our periods on a pretty regular basis, it’s not something we really discuss much either, is it? I can’t recall having many in-depth period conversations with my female friends or family members over the years. If it happens to come up, it’s usually something like, “Ugh, my period is early. Do you have an extra tampon?” or  “I feel like I’m getting my period” or “I hope my period comes soon.” 😉

Before we began working with Puristics, I really can’t recall ever talking tampon/pad brands with anyone. And I certainly never thought to discuss the materials used in the products.

But the the more I’ve learned about the materials of some of the popular brands’ feminine protection products, the more I realize that we should be thinking about and discussing it more.

That’s why I loved this Puristics ad the first moment I saw it: 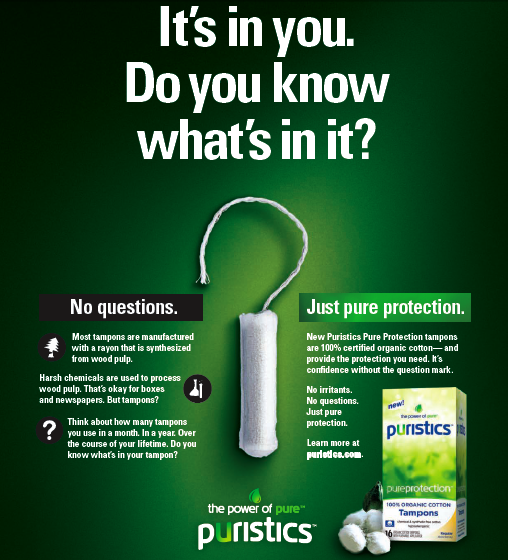 I even mentioned it in my previous post about Puristics. I mean, it’s direct, compelling and to-the-point. It gets me thinking.

Isn’t that what ads are supposed to do?

Apparently not. Because Puristics recently had a prominent women’s magazine tell them that they deemed the ad offensive and that they wouldn’t publish it.

When I found this out, I was shocked. Like any modern woman in the digital age would do, I asked my Twitter followers what they thought. These are some of the responses I received:

“That ad definitely did NOT offend me. Good ad, important message!”

“Really? That was offensive? I’ve seen much worse and that actually had a point…”

“That ad doesn’t look bad to me at all. I kind of like it, actually.”

Clearly, I was not alone.

Puristics ended up running an ad in the magazine, but a revised version of the one above. Here’s the original and the revised side by side: 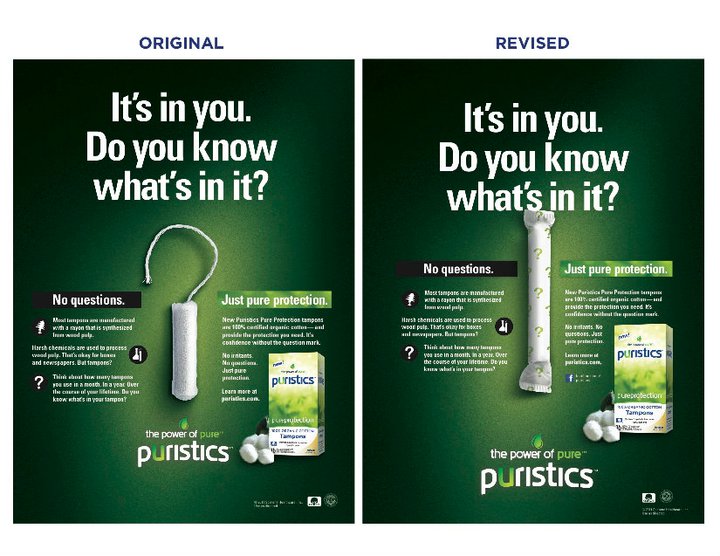 Look, it’s time for us to start discussing that red elephant in the room. It’s time to start paying attention to what’s in the feminine protection products we use. Yes, the materials of the products we put in us.

What do you think? Puristics wants to know! Head over to Facebook and voice your opinion.

Disclosure: We at Mom Generations are honored to be spokespeople for Puristics. We are being compensated for representing the brand; however, all opinions are mine and I stand by them!