I kept hearing Henry tell his brothers yesterday in the car that he’s scared.

I have to admit, we were driving in the car, he was buckled into his car seat and I really didn’t know what there was to actually be scared of…

So I did what any mother would do (lol…), I took out my video camera and taped him. 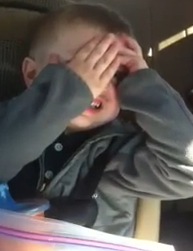 He’s Scared of the Dragons… was last modified: April 22nd, 2011 by Audrey McClelland