People often ask me how I lost all the weight.  They have that twinkle in their eyes, fully expecting to hear my secret, my shortcut.  Is there a magic pill?

I’m sorry, there is not!

It’s just that I learned to make good choices.  Look, I have four kids and am always running here and there.  Ideally I’d be home for all my meals, but that’s not reality.  Sometimes I have to grab something on the go and that’s where a smart choice can make all the difference.

Last night was Chipotle after a trip to Sears to hit the Land’s End sale for the boys.  Before we left, I logged onto their website to check out the nutritional info.  GASP!  Yes, I wanted to see exactly what I was consuming.  It’s easy to look at it as “Chipotle is healthy” and not think twice about throwing down a giant burrito.

This is how people fool themselves into thinking they’re doing everything right, but they just can’t seem to lose the weight.  Tht’s the secret, well part of it anyways.

So what did I find?

The tortilla had more calories than anything else in the burrito, except maybe the guacamole (I passed).  The tortilla has 290 calories – 9 grams of fat – 44 grams of carbs – 7 grams of protein.  I assumed that was going to be the lowest calorie part of the equation.

I got the burrito bowl.  All told it was 460 calories – 10.5grams of fat – 50 grams of carbs – 42 grams of protein.  Eliminating the tortilla saved almost 300 calories (that’s a meal!) and half the fat and carbs.  I got chicken, rice, beans and salsa, skipping the higher fat and calorie sour cream, guacamole and cheese. 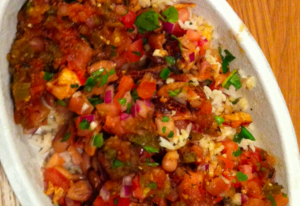 The next choice was to only eat half.  It was HUGE!  I could have shoveled it all down and felt super stuffed, but I chose to eat half and still feel full, just not like I was going to split.  What’s great is that it only ended up costing me 230 calories and I had lunch for the next day.

That was pretty easy.  Just because you’re eating out, doesn’t mean you can eat whatever you want.  There are always decisions to be made.  Be honest with yourself and look at the nutritional info before you leave or while you’re there.    Because I looked, I consumed only 1/3 of the calories I would otherwise have had.  I was still full and didn’t feel like I was depriving myself.  It was a good decision!