Day 22 of our 31 Letters Literacy Project is all about NONSENSE!

Don’t ya just LOVE nonsense?  Well, KIDS do!  Put on your thinking cap and think like a kid… like the kid you once were.

Today’s letter topic is inspired by Day 22 of 365 Days of Literacy for Kids… and a limerick by 19th century English limerick-poet extraordinaire, Edward Lear:

There was an Old Man with a beard,
Who said, “It is just as I feared!
Two Owls and a Hen,
Four Larks and a Wren,
Have all built their nests in my beard!”

Find an old photograph of yourself… the funnier, the better.  Funny hair-style.  Funny clothing-style.  Funny face.  Funny action.  Funny memory.  Definitely something your kids/grandkids/special kids in your life will raise their eyebrows about!  Write a limerick about yourself as you appear in the photograph.

Mail your letter, photo and limerick to your kids/grandkids/special kids.  COME ON!  At least TRY!

Here is my Limerick Letter to my grandchildren today:

Hi, my little darlings!  As you know, I love to read.  I love to write.  And I especially love to laugh.  If I combine the reading, writing and laughing parts… we’d get a LIMERICK!

A LIMERICK is a little poem, or stanza, of 5 lines.  The 1st, 2nd and 5th lines rhyme, and the 3rd and 4th lines rhyme.  Here is an example of a limerick written by the famous English limerick-poet, Edward Lear:

There was an Old Man with a beard,
Who said, “It is just as I feared!
Two Owls and a Hen,
Four Larks and a Wren,
Have all built their nests in my beard!”

A limerick is supposed to be funny or witty or nonsense! Just think about 2 owls, 1 hen, 4 larks and 1 wren building a nest in an old man’s beard!  Nonsense!

Well, I’m going to try to write a LIMERICK for you based on a silly photograph of ME that I found in an old box of “things” in my attic.  I’ll give you the story of the photograph first, though… 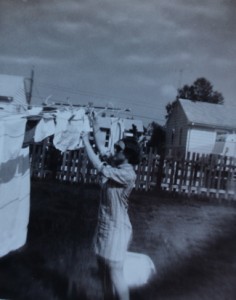 I had just turned 17 years old.  You can’t see the margin of the photo, but it says Nov. 69. What I’m doing in the photo is taking clothing off the clothes-line that my parents had in our back yard.  You’re probably wondering what a clothes-line is!  We have clothes driers now… those things next to our washing machines that dry clothing.  Back in 1969, my family didn’t have a clothes drier.

Instead, we had ME.  One of my chores was to take in the clothes that my Mom had hung out to dry each morning.  As soon as I got home from school, I got the laundry basket (you can see it next to me in the photo), went out to our clothes-line, unclipped the clothespins from the clothing, folded the clothing into the clothes basket and then put the items where they belonged.

Taking clothing off a clothes-line was not exactly fun for me.  On cold days, my fingers froze and things like towels and facecloths were stiff!  On hot days, I’d practically boil in the hot sun.  (A clothes-line is usually in direct sun for best drying.)  On windy days, the things would whip around and around the clothe-line and I’d have to untangle them.  And lots of times, little gnats and bugs and gross things would land on the clothes and I’d have to sweep them off before folding them.  Ewwwww.

And that brings me to BROTHERS.

You see, the problem was that the clothes-line and folding thing was MY CHORE.  My brothers NEVER HAD TO DO THE CLOTHES-LINE OR FOLDING THING.  This got me kind of… well, annoyed.

Especially on the day the photo was taken.

If you look very closely, you can see that I have rollers in my hair.  (I still wear rollers just like those, come to think of it!)  I had somewhere special to go later that afternoon.  (Don’t ask me where ‘cuz I don’t remember!)  But I remember getting home from school that day, rolling my hair, putting on a cotton robe (you can see that in the photo, too!), ironing the clothes I would be wearing later, running out of time to do my chore… and asking my Mom something like why do I always have to take in the clothes, fold them and put them away?

My Mom answered something like because you’re the GIRL in the family.

That’s when my Dad got home from work.

If you remember from some of my other letters, it was not tolerated in my family to be rude or disrespectful… but I was encouraged to have my own opinions and to express them.

This clothes-line day was one such “expressing” day.

I wanted to know why boys (my brothers!) could go caddy at the local golf course, mow lawns, take our dog Chippy for his daily walk and do awesome stuff like that and I had to take in the clothes day after day after day, fold them, put them away… AND do other “girl” stuff like wash dishes and vacuum.  I was irate, indignant and GROUCHY about it… just like a lot of other girls were back in 1969!  (That’s a story for another letter, another time!)

Anyway, my parents listened to me.  Then… I still had to take the clothes off the clothes-line, fold them and put them away before I could go on my way.

My Dad snapped this photo of me as I quite UNHAPPILY accomplished this chore.  He kept trying to get me to laugh.  Uh, uh.  No way.  Taking in the clothes when I had something important to do was no laughing matter.  Not even a smile.  Not the tiniest glimmer of happy.  I remember this day like it was just yesterday!  I was kind of feisty at 17!

Anyway… this leads me to attempt a LIMERICK about my attitude that day:

There once was a girl with a chore,
A chore she didn’t want to do anymore!
So her clothes-basket and pins,
She threw to the winds.
Yikes, her parents did roar!

Very soon after this, my parents DID get a clothes drier.  It went in our basement, right next to the washing machine. And guess who had to go to the cellar, take the clothing from the drier, fold them and put them away?

You guessed it.  ME!

What are your chores?  Do you love them?  Can you write a LIMERICK about one!?

Love forever and ever,

Mail Tidbit of the Day: The first envelopes were made of cloth, animal skins or vegetable parts. The Babylonians wrapped their messages in thin sheets of clay that were then baked.