Today, while discussing potential plans for this coming Valentine’s Day, it occurred to Brian and I that we don’t remember what we did for Valentine’s Day last year.

There was no secretive planning or big surprises or roses strewn about a room. (Not that there’s anything wrong with that.)

I guess it just wasn’t a really big deal for us, and I think I know why: we make it a priority to show our love for each other, do romantic things and come up with little surprises every day.

From the very beginning of our relationship – and even before – Brian has been extremely chivalrous to me. He holds doors for me. He holds my coat when I put it on. When he makes coffee in the morning, he has my mug, sugar and milk all set up for me when I get to the kitchen. When it snows, he wipes all the snow off my car and warms it up for me. Sometimes I’ll even go in the bathroom in the morning to find that he’s already put toothpaste on my toothbrush.

I was going through my divorce when I met Brian, as I’ve mentioned before. I met him about seven months after I separated from my ex-husband, so I had gone on a few dates with other guys during that time.

My faith in men – and, particularly, in finding the right man for me – was at an all-time low.

And then I met Brian.

I had never, ever dated anyone younger than me, I think because I equated younger with immaturity. And yet, here was this guy, almost 5 years younger than me, who had the quiet confidence and self-awareness of someone even older than me.

And he was so kind and caring and honorable.

To you, these many not seem like difficult tasks to master, but then you must not have dated some of the guys I did.

Back when we first met, I told Brian that I had had enough with undependable guys, and so when he would say he’d call me later, he’d add, “And you can count on that.”

He also told me he would never do anything to hurt me, and I remember thinking how sincere he was. I really believed him.

A year and a half later, I still do.

We were sitting on the beach, just the two of us, and we were talking about past relationships, my marriage, my trust issues… and he looked at me and said, “You’re like a little wounded yellow lab.”

I know it sounds funny, but he said it so sweetly and sincerely.

Then he moved his beach chair a few inches closer to mine and started gently stroking the top of my head.

Up until that moment, he had never held my hand or put his arm around me or anything.

It was that first moment of contact between us that just changed things for me.

I love Brian so much. I feel that we fit together so perfectly. He gets me in a way that no one else does.

Of course we will acknowledge Valentine’s Day this year… maybe we’ll even go out to dinner to celebrate.

But I am just so grateful to be with someone who shares his love with me every day, not just the days specifically marked on the calendar for it. 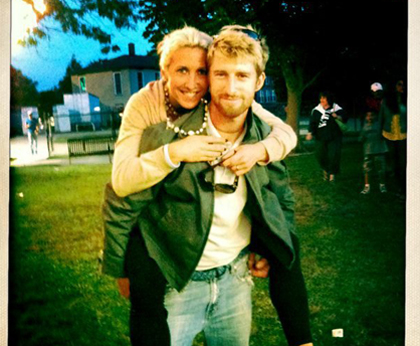