I moved to NYC right after I graduated Brown University…

It was always my dream to live there.  OK… in a way, I thought I wanted to be Carrie Bradshaw.  There were just 2 things that were preventing me (in a good way) from living out that dream.

1. I moved to NYC with Matt… so I was never actually “single” in the City.

2. My first salary out of college was 25K… so essentially that covered my rent, bills, subway card and food.  There was NO extra money for clothes when I first moved there!  Which DEVASTATED me.  Severely.

Over the next few years quite a few things changed…

We moved 5 different times in NYC (we wanted to experience a bunch of different areas).

And I had 2 little boys in NYC.

After William and Alexander were born I knew it was time to move out of the City.  I wanted to have another baby, and I just knew that was never going to happen in NYC (especially since we lived in a one-bedroom apartment with 2 kids… so LITERALLY Matt and I were never alone.  Trying for a 3rd baby was seriously never going to happen.)

So we moved to Rhode Island.  And it was the best thing we’ve ever done for our family.  But I still get those NYC aches… if it was possible for us to raise 4 kids in NYC, I would do it. Right now that’s just not in the cards.

Last night my mom and dad were at Homegoods in Rhode Island… my mom called me up and said, “Look at your cell phone, I just sent you a photo of picture we saw in the store that screamed you. Do you like it?”

This was the photo: 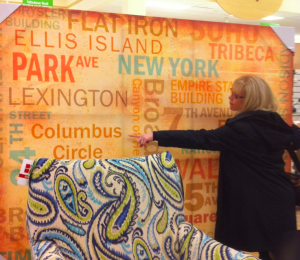 So last night… Matty and I went to get it… 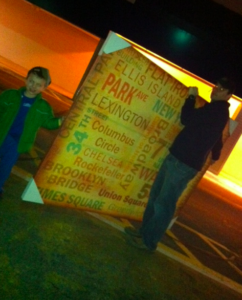 Thank you GOD… I finally have a little NYC in my Rhode Island home.