Years ago, in the late ’80s, after skiing for many winters in Rangeley, Maine, my parents decided to take us kids there for a summer vacation. They loved spending winter weeks and weekends with us in that little town, and had heard that the summertime was equally appealing.

I was about 8 years old and I didn’t particularly love traveling to Rangeley. It was a good 7-hour drive from home. These were the days before iPods, smart phones and DVD players in cars, so I can only imagine, with 4 kids, there was a fair amount of, “Are we there yet?” coming from the back seats of our caravan.

There also wasn’t much to do there, in my eyes. When we’d go skiing in other locales, I usually looked forward to the end of the day, after skiing, when we could spend some time in the hotel’s indoor pool or game room. Hotels in Rangeley had neither.

So I remember kind of looking forward to this summertime retreat to Rangeley. Staying at a cabin on Rangeley Lake, I figured we’d have access to a lot of fun summer activities.

But there was no such luck. The entire week we were there, it RAINED. And it was COLD. I remember having to go into town to buy extra sweatshirts and sweatpants because, well, it was August and we hadn’t packed cold weather gear. Only, the town is so small and remote that the clothing store options were few and far between. We could basically only find gear that made our family look like a walking billboard for RANGELEY and MAINE.

My memory of that vacation consists of the following: Going on one canoe trip around the lake (a rare non-rainy moment, I suppose), watching Full House (random, I know) and playing Scrabble in the cabin.

Oh, yes, the cabin. It was tiny and there were 7 of us staying there (my brother Keith had brought a friend). It had no shower, just a small bathtub.

The trip was memorable, but not for the right reasons. I actually think we ended up retreating home early.

We have been up to Rangeley many times since that vacation, but never again in the summer.

It is the memory of this trip, so emblazoned on my mind, that had me quite hesitant when Brian suggested we spend the weekend in his family’s cottage in Maine.

He didn’t exactly sell the place when he said, right off the bat, that there was no running water. My friend, Dawn, astutely pointed out that no water could mean no indoor plumbing, but Brian thankfully informed me that we did have that. The cottage does have running water; it had just been turned off and he didn’t want to have to go through the process of turning it on again for just two nights.

This weekend away was actually going to be a working vacation for Brian; the land that the cottage is on hadn’t been landscaped in quite some time, so he wanted to clear it out and make it look good. I had a lot of work to do, but I figured that with my air card, I could get Internet and everything would be fine. Plus, the cottage is on a lake and the doggies would have fun with that.

Rustic cottage on a lake in Maine? Given my previous experience with something very similar, I wasn’t exactly counting down the days to the trip.

We left on Friday evening, after packing up Brian’s truck with all the tools and equipment he’d need. I had put an ad on Craigslist looking for two guys to help him, so on the way up I looked through the responses to the ad on my iPhone and Brian called people.

Craigslist is funny. It can be hit or miss big time, either way. He got a ton of responses, but some got no call backs – like the guy who said he wouldn’t show up for less than $20/hour. Others were not the right fit for the job – like the 14-year-old. Luckily, he finally found two guys who seemed like they would 1) show up (that’s half the battle) and 2) know how to work the equipment.

It took us about 3.5 hours to get to the cottage. About 2.5 of those were on the highway… and then we drove the back roads. At one point I actually did ask, “Are we there yet?” quite seriously.

We finally arrived at our destination just before 11pm.

The back roads were dark. The road that the cottage is on was not paved. I had lost cell phone service somewhere along the way. The next-door neighbor was a taxidermist.

We were in Nowhere, Maine.

As soon as I stepped out of the truck, I knew why we needed two guys and a ton of equipment the following day. Everything was overgrown. Brian’s parents have owned the cottage for years and years, and Brian had spent a lot of time there as a kid, but now that he and his brother are adults, no one really goes up there anymore.

This weekend, I realized, was Brian’s attempt to begin the rebuilding process so that people will use the cottage again. He wanted me to love it just as he had loved it as a kid. He wanted our extended families to be able to come up and enjoy it. It was endearing.

But I still had to climb through weeds and shrubs and sticks in the pitch black night. It was difficult to feign delight, but I tried to be a good sport.

Thankfully, the cottage had electricity, and Brian had bought a converter box for the super old television. It was black and white and grainy, but we had a few channel options! That was good because my air card only got a slight signal so the Internet was extremely slow and spotty. I basically knew that I wasn’t getting any work done on my laptop.

We were exhausted, so we went to bed pretty soon after we got there. When we woke up the next morning, I looked out the cottage’s back window and saw that this place had some serious beauty going for it. 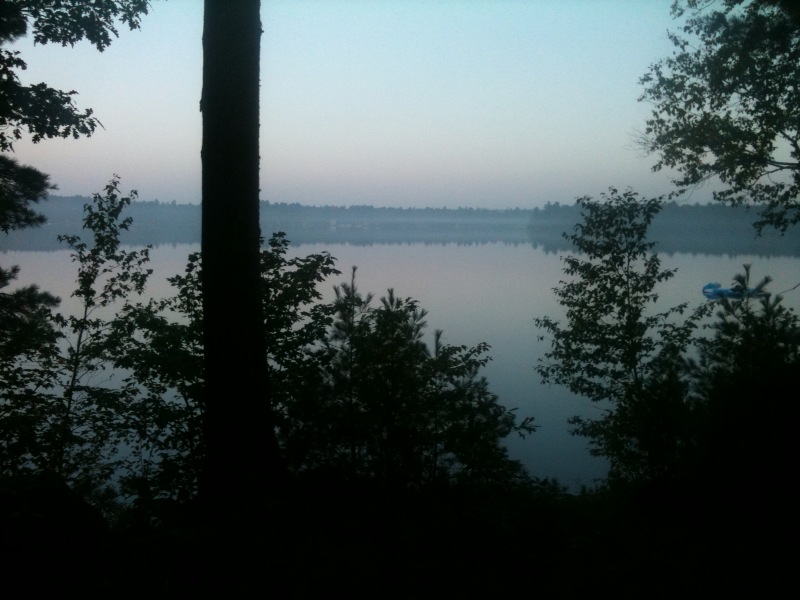 As Brian led his Craigslist crew in yard clean-up… 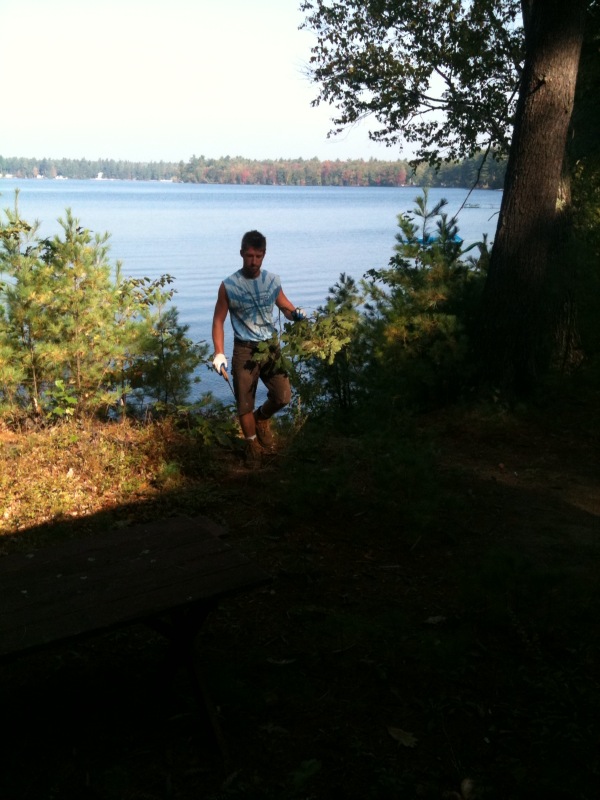 … following an unsuccessful attempt at getting a better Internet connection… 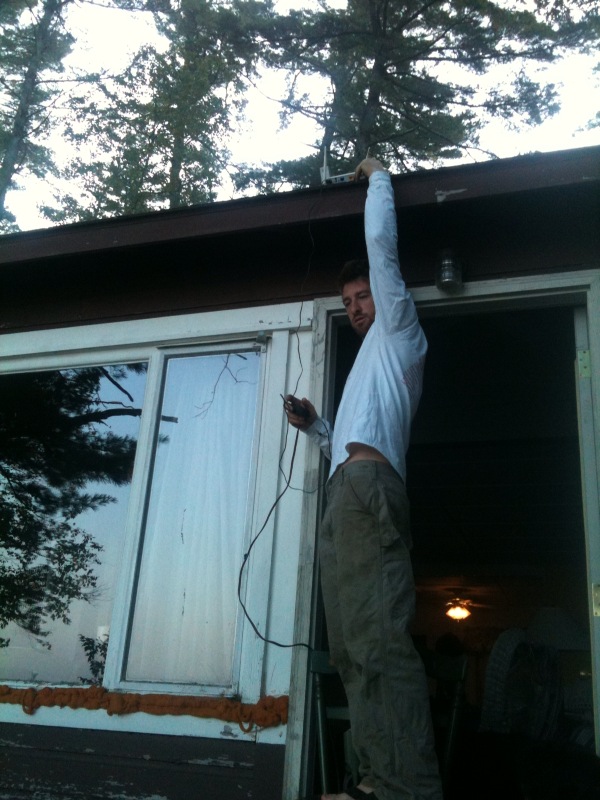 … the dogs assumed their positions. 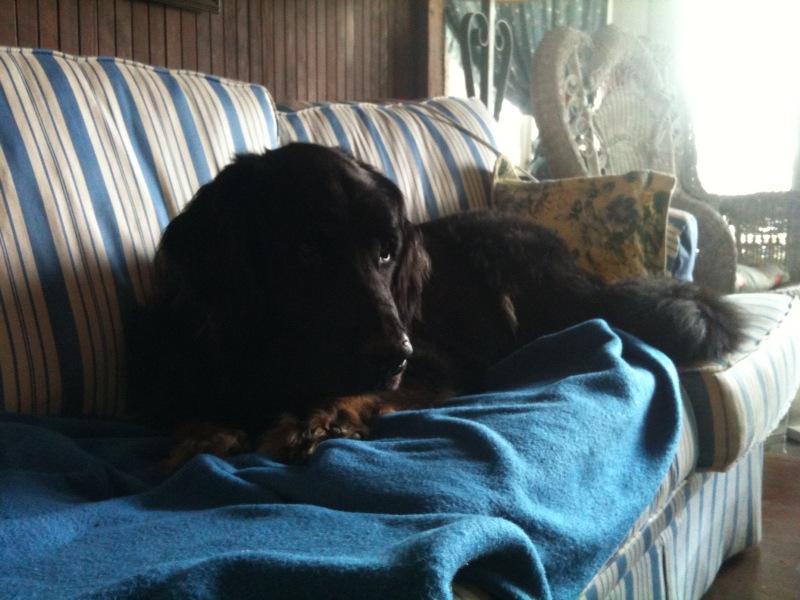 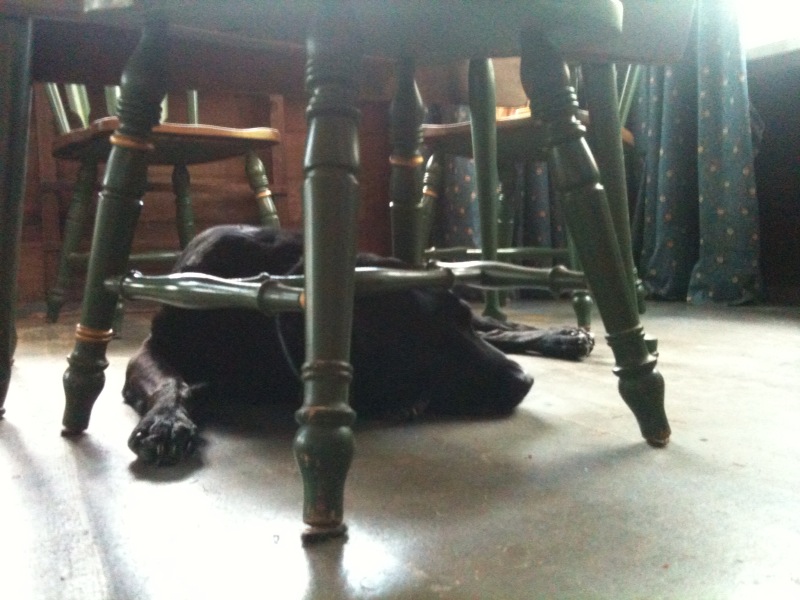 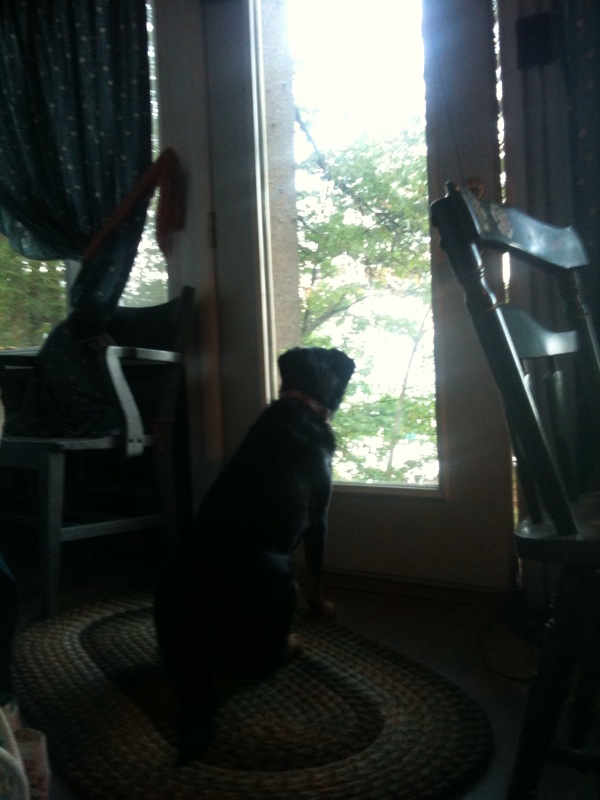 I opened up the windows for some much-needed air circulation, vacuumed, went food shopping and cooked a little lunch for Brian.

When the yardwork was done (we scored Craigslist guys that both showed up and worked hard!), and there were no weeds, shrubs or sticks to trek through, the land actually looked nice. The cottage itself has good bones, so the property got a nice little facelift.

Then, it was time to take the pups into the lake for a dip. It was a beautiful day, unusually warm for late September, and the water was a nice temperature. 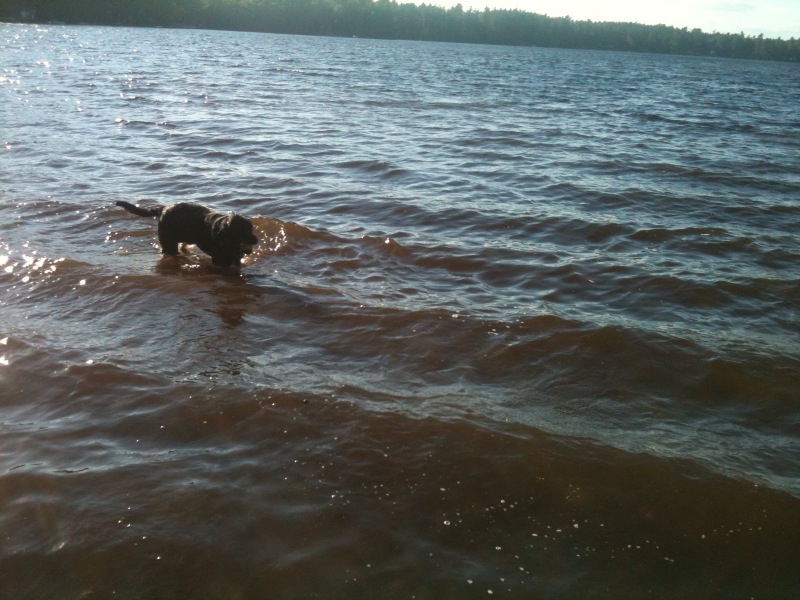 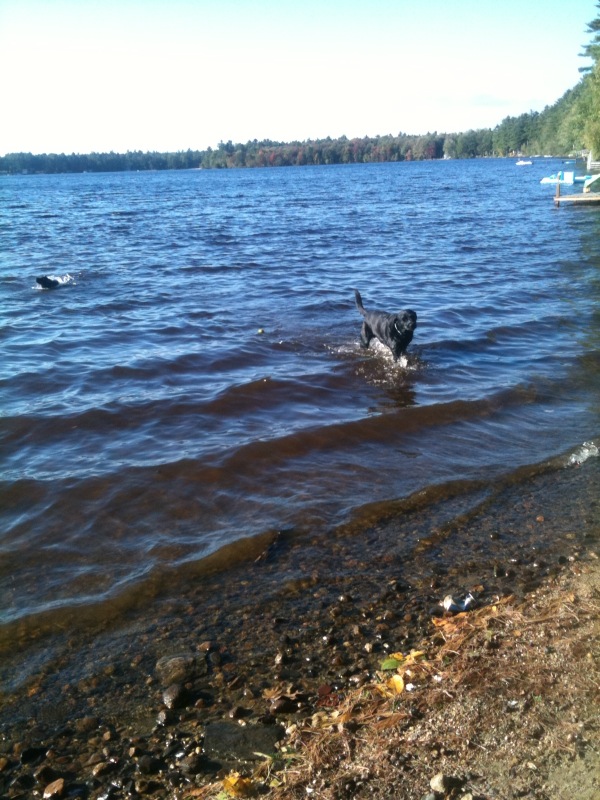 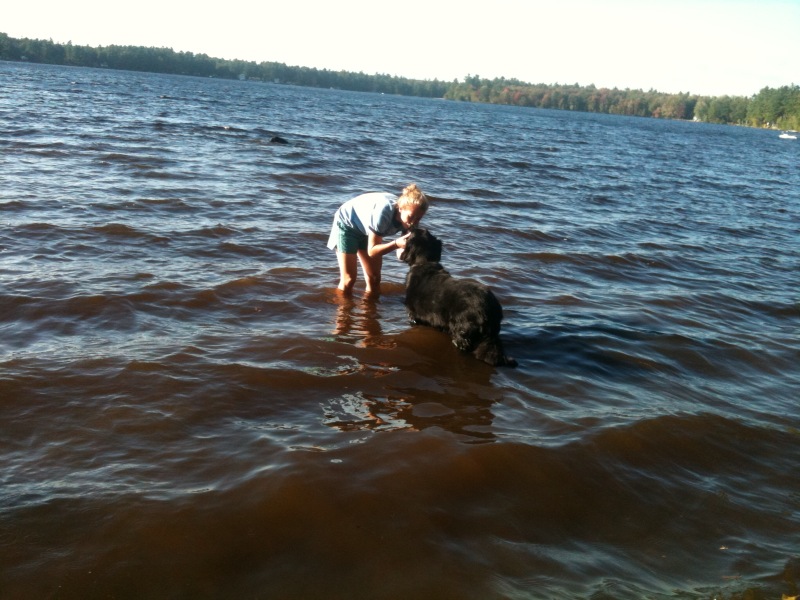 And you know what? I had fun, too.

Later that evening, Brian and I went to visit his grandparents in Portland (civilization!), and after that I brought Brian up to Brunswick to the Bowdoin College campus, where I spent the first 1.5 years of my college life (yes, I was once a Mainiac!). We ate at Scarlet Begonias, which was as delicious as ever.

We spent Saturday night watching some more grainy television before hitting the hay, and when Sunday rolled around and it was time to head home, Brian asked if I had had a good time.

Despite the outward similarities between his family’s cottage and the summer week in Rangeley experience… despite being virtually Internet-less (I will say that I had service on my iPhone, so I could update my Facebook status with things like: Legit in the middle of nowhere. For a brief second it said No Service on my iPhone. Near freak out levels.)… and despite having no running water… I enjoyed myself. I had Brian’s company and the company of our dogs, not to mention a beautiful lake view.

And I have the vision of what the cottage can become once again. Hopefully someday, if we have kids of our own, they will be able to have wonderful experiences there just like Brian had as a child.

For that to happen, however, I will have to insist on running water.

For the kids, of course.

My weekend as a Mainiac was last modified: September 28th, 2010 by Jane Couto Govednik
SHOWHIDE Comments (7)

My weekend as a Mainiac was last modified: September 28th, 2010 by Jane Couto Govednik