I’m sure you’ve heard it.  You know… the “everyone has a twin” thing.  And there certainly are people who look like other people.  Shared similarities.  Facial, especially.  There is actually someone very famous who looks just like my husband…

But have you ever seen someone who looks so much like someone you know that it literally made you stop in your tracks?  Do a double take… or quadruple take?

This happened to me Saturday night at Baseball Tavern in Boston.  Barry and I had made last minute plans to head to a Red Sox game.  It was a beautiful afternoon and we had tickets to the 7:00 game.  Audrey and her family were on a cruise somewhere in the Bahamas.  Jane and Brian were in New York City.  Keith and his family were in New Hampshire.

And Adam and his family were with friends back at Bonnet Shores Beach in Rhode Island.

Barry had talked to Adam while on our way to Fenway Park.  Yes, Adam was at the beach.

So why did I spot Adam as Barry and I walked across the roof-top bar at Baseball Tavern on Boylston Street?  And why didn’t he seem to see me?

I must have looked very odd indeed as I stopped, stared, continued walking… turned around and stared again.  I did the whole squinting eyes and knit brow thing.  But “Adam” didn’t blink.  He kept right on talking to his friends, none of whom I recognized.

I caught up with Barry at the bar and told him to turn around and look at this guy who looks like Adam.  Barry did.  He was obviously intrigued.  We got a couple of beers (our first ones, by the way… so no blaming the beers on the eyesight) and walked by this impostor again.  I asked Barry if I should tell this stranger that he looks like our son.  Barry was all no way… too weird.

But I did talk Barry into wandering over to the center of the roof-top of that Baseball Tavern bar and snap a photo.  What a guy Barry is.  Huh?

So OK.  I leave it up to you.  Get rid of the stranger’s tussled hair and add a smile.  (And, of course, understand that Adam is far more handsome!)  Can you see why I did a quadruple-take as I saw this guy at the Boston Tavern when I knew that Adam was at the beach in Rhode Island!? 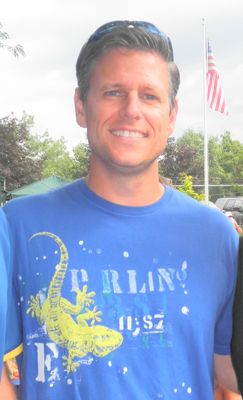 You know what they say…

“Everyone has a twin…” was last modified: August 23rd, 2010 by Sharon Couto
SHOWHIDE Comments (4)