There’s a beautiful little playground near my home. It has all new swings and slides and climbing apparatuses and a new-age design see-saw. It has a little, tiny covered Club House area where kids can play or picnic or pretend it’s an ice-cream shop or any other thing that kids imagine. This playground has a nice, safe fence around 3 sides and the 4th side opens to beautiful grassy fields and hills.

But the most lovely thing about this playground, I think, is the big, beautiful tree in the center of the little universe of playthings. I don’t know much about trees, but I do know that this tree has been around for awhile. This tree is tall and stately and happy.  Its trunk is gloriously wide, almost like two trees intertwined. This tree extends its generous arms up and out and over… protecting and shading and smiling at the little ones who come to play and the grown-ups who come with them. Around this tree is a built-in sitting area of six connected benches… a wonderful reprieve to sit and enjoy the sights and sounds of children having fun. 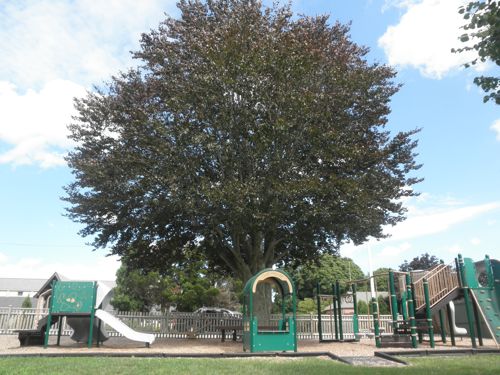 Whomever decided to design a playground around this wonderful tree is a saint. Truly. Maybe there is a Saint Playground, for all I know.

This little playground used to be not so beautiful. It had a couple of broken-down swings and one of those slides that heats up in the sun like a skillet. But it did have that beautiful tree. The tree wasn’t actually inside the broken down fence of that old playground that surrounded the swings and slide, but some of its branches leaned over the fence as far as they could to lend shade on a warm day.

I’m sure if that tree could speak, it would thank Saint Playground for understanding just how lovely and gracious and important that tree is, and how it needed to be inside the fence of the new playground… a centerpiece of beauty that grounds the vision itself.

But hang on a second… because I know that tree does speak. That tree has stories to tell. And that tree spoke to me and my grandsons just the other day.

William (5) and Alex (4) had been asking me to take them to the playground. It is less than a 10-minute walk from my house… a very pleasant walk past a couple of churches, a magnificent view of our little harbour and very near our town library. I packed a couple of bottles of water and some cookies and off we went. The boys climbed and played and imagined and slid down the slides. They swung high up in the air and “sold” ice cream at the Club House.  When they were hungry and thirsty, we sat on the benches under the tree and enjoyed the coolness of its branches. 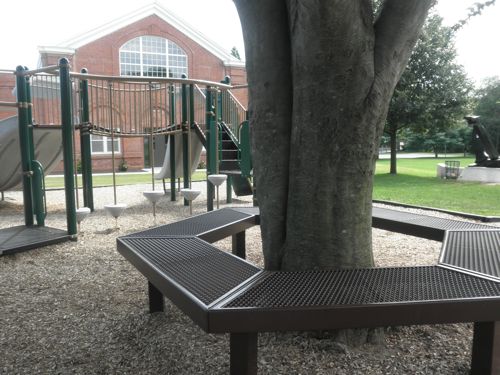 That’s when the tree began to speak.

William heard it first.  He was staring at the tree with such inquisitiveness when he said, “Grandma, someone carved things in this tree.” 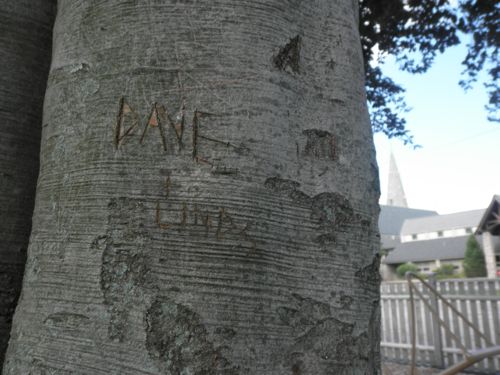 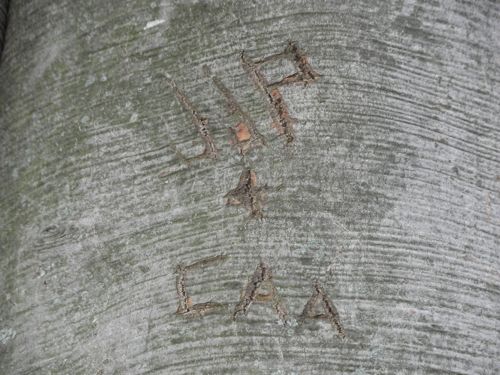 I said, “Those are carvings of people who were in love.  Initials.”

“What are initials?” asked William.

“Yeah,” Alex chimed in as he stood on the bench and poked his finger along the carvings.

“Initials are the first letters of your first name and last name,” I answered.  “My initials are S.C. for Sharon Couto.  Yours are W.M. and A.M. for William McClelland and Alexander McClelland,” I explained.

“But why would someone hurt this tree with their initials?” William asked.

I smiled.  “Someone didn’t mean to hurt this tree,” I said.  “Someone was telling the world about being in love.”  We looked at all the initials and all the names and I told William and Alex that these people were in love, or at least in like, when they carved their initials and names and heart shapes.  I told them that the tree was telling their stories… maybe even years and years and years later.

I told them that the tree was the keeper of these little love stories.

William wasn’t convinced.  “But why do you have to carve it in a tree?”  he kept asking.

“Because it’s a tradition.  Because it’s permanent.  Because it will be there forever.  Because people think they will be in love forever. Because the tree is the keeper.”  I had to smile at his practical analysis that people might move away or forget.

And that’s when I remembered something that I had forgotten.  My initials.  My initials in a tree in New Hampshire.  I told William and Alex that when I was 10 years old, and I had a different last name because I wasn’t married yet, I thought I was in love (or at least in like) with a boy whose initials were R.G. and I carved S.K. + R.G. in a tree right across the street from where I lived.

That’s when William got really, really practical.  “But what about Pop-up?” he asked.

“I didn’t know Pop-up way back then,” I explained.

“But you should carve out those initials with that boy and put in your new ones with the S.C. and B.C. for Pop-up,” he said.

“But everything happened the way it was supposed to,” I explained as I hugged William to me, on that bench, under the branches of that tree.  “I thought I was in love with a boy named Robbie Gilman.  I carved our initials.  I moved away to Rhode Island with my family.  I grew up.  I fell in real love with Pop-up.  We got married.  We had your Mommy. She grew up and married your Daddy.  She had you and your brothers.  I love you guys more than any initials could ever, ever tell.   Those initials in that tree in New Hampshire are part of me growing up.  It’s part of my story.  That tree holds that little, teeny part of my story.  We can’t carve those parts away.  They make us who were are now.  Today.  In love with Pop-up.  And you.”

William thought about all of this as he studied that tree with all of its little stories.  Alex continued to trace as many initials as he could reach with his little fingers as he listened, too.

Finally, William said, “So, Grandma, who are all these people?”

“Ah,” I answered, “this tree knows all those people and all their stories!  Maybe if we come often enough, the tree will let us know who still comes to visit.”

Then William really, really surprised me with his romantic side.  “Grandma, will you ever go back to New Hampshire to visit your tree?”

I’m not often speechless.  But this innocent little inquiry left me speechless.  Soon both William and Alex were waiting for my answer… looking at me with their big blue eyes that have come from my journey and Barry’s journey and generations of journeys just the way the journeys should be.  “Yes,” I said, “but only if you guys come with me!”

So this trip to visit that tree that I hope is still across the street from my old house in New Hampshire is another of my 57 in 52.  I don’t remember how high I had to climb to carve those initials.  I don’t remember if Robbie Gilman even liked me back (well, he must have because he did throw an icy snowball at my face while sledding one day and I did chase him for what seemed like miles ’til I caught him, knocked him down, sat on his back and shoved his face the snow. Now, that’s 10-year old love.).  I don’t remember if he even knew I carved our initials in that tree.  I haven’t been up in that tree in all of 47 years.  And I don’t know if I can still climb a tree.

But what I do know is that beautiful tree in my neighborhood playground not only tells its own stories, but it tells the stories of other trees as well.  It tells stories to my grandchildren.  Yes, trees do speak. We just have to listen… and thank Saint Playground for keeping that particular talking tree, of course!

The Initials in the Tree was last modified: July 29th, 2010 by Sharon Couto
SHOWHIDE Comments (7)

The Initials in the Tree was last modified: July 29th, 2010 by Sharon Couto