I’m hoping that if I tell myself I’m ready often enough, it will be true.

This is a race I competed in last year. It was actually an amazing experience for me. But I also went into it with a lot of confidence… the race was just a little over 2 months after my Boston-qualifying marathon and I had never felt stronger or more sure of myself athletically.

This year, the race is just a little over 2 months after my meet-and-greet with The Wall at the Boston Marathon, and quite honestly, my confidence has yet to come back in full force since then.

But despite this, as well as the fact that my race times are a little slower than they were last year, I try to keep focusing on the following positives: I’ve trained a lot, I’ve had some good practice races (including one this past weekend – more on that later), and two years ago at this time if I had even attempted to run a mile, it would not have been a pretty sight.

Now, on to the title of this post. First, the Training…

Last week was my heaviest pre-race training week. I put in over 150 miles of swimming, biking and running. 56 of those miles were on Friday, when Audrey’s husband Matt and I woke up at 4:00am to ride the bike course for the Half Ironman.

We got to see a beautiful sunrise along the beach… 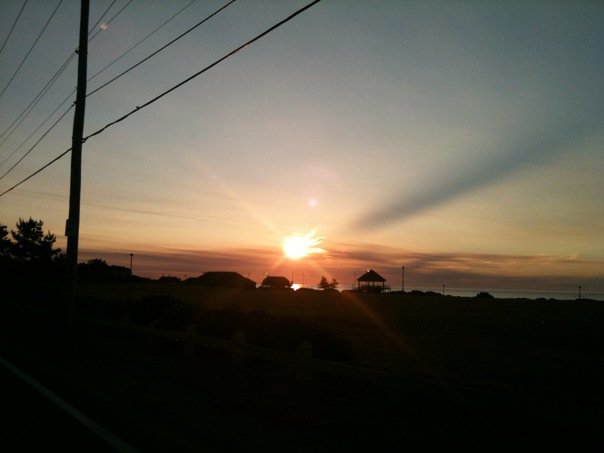 And then… there were a LOT of HILLS.

That’s pretty much the end of that story.

Then on Saturday I ran my last long run. I had slept in, and then procrastinated… so I didn’t end up starting my run until about 10:00 AM. It was hot, my legs were still tired from Friday’s ride, and I had left my FuelBelt at my parents’ house. Luckily, Brian placed a water bottle in a plastic bag with ice along my route, so I kept on looping around to hydrate. It wasn’t the best (or fastest) run, and I actually stopped halfway through it at Brian’s garage (where he was working) for a much-needed pep talk… but it got done. And just so this paragraph doesn’t sound like one big complaint, I will say that I actually felt pretty good the last mile. So, yay!

Brian and I headed to Newport to have a few drinks to celebrate one of our running buddy’s 30th birthday.

Now, I know competition to make it onto this blog is stiff, but when a request is made – even if it’s after a few beverages – I think it is only fair to honor it. So, Mike, here you go: 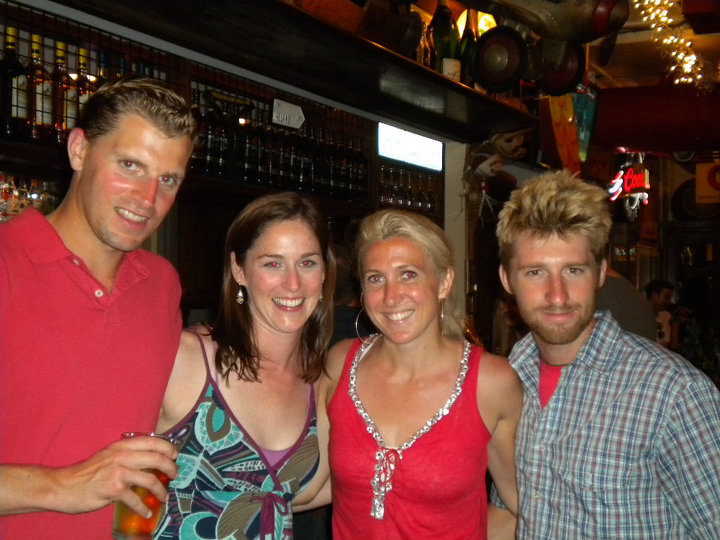 Now, on to the Races…

Well, actually it was just one race – the Oh My Goddard! Sprint Triathlon (hence this post’s title) at Goddard Park (hence the triathlon’s name) in East Greenwich, RI. A bunch of people in my group raced (as well as Matt – his first triathlon!), including our friends who were getting married later that day (that would be weekend celebration #2).

The professional race photos are not available yet, and believe it or not, I forgot my camera in the car (I know!), so at the moment, this picture, taken by one of my friends as I ran from the swim to Transition 1 (T1), is the only photographic evidence that I raced that day: 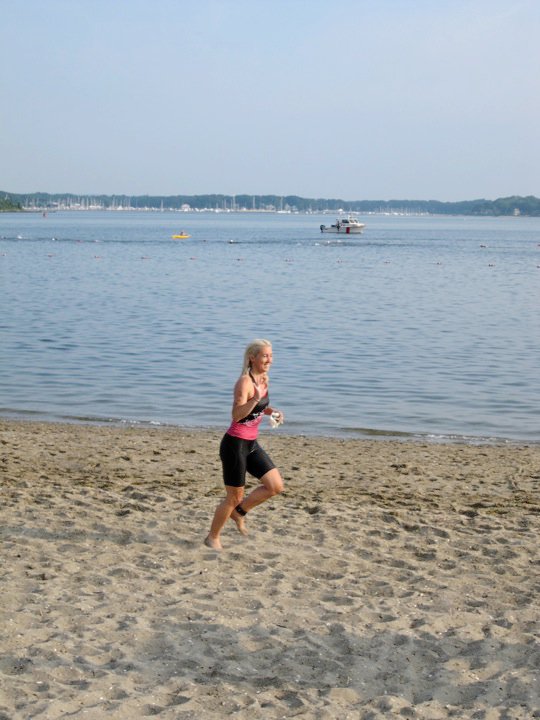 The race course was beautiful… a swim in the pond at Goddard Park, then a mostly flat bike ride through East Greenwich and North Kingstown, followed by a run in the park. And remember how I lamented about my terrible transition times in my last triathlon? I did much better this time.

There were definitely some discrepancies between the distances each portion of the race were supposed to be and what they actually were.

Now, while I know it was the first time this race was ever put on… and while I’ve never put a race on myself, so I can’t even say, “Well, I would have done XYZ…” and while I would absolutely do this race again… I just think that the stated distances should be accurate in a race.

The swim was supposed to be 1/4 mile, which is not a very long distance, so had already decided before the race that I wasn’t going to wear a wetsuit. My thought was that since the swim was so short, the small advantage that wearing a wetsuit would give me just wouldn’t be worth the hassle of having to take it off in T1.

Once I got to the race and saw the swim course, it was clear that it was much longer than 1/4 mile – probably not quite as long as a 1/2 mile, but definitely close to it. That’s quite a difference. So, my swim probably wasn’t as fast as it could have been, but the bottom line is: now I know to always be prepared for the unexpected. I should have brought my wetsuit anyway.

The bike portion was great. It was an 11-mile ride on a shady, quiet, tree-lined course that I’m pretty used to riding on. My legs still weren’t feeling 100% recovered from Friday’s 56-miler, but overall I was pretty happy with the ride, and it seemed to go by pretty quickly.

Finally, the 3.2-mile run… which, it turns out, probably wasn’t quite 3.2 miles. The route started out through some wooded trails, which meant dodging horse poop, but I liked running in the shade.

When we got out of the woods, there was a mile marker for Mile 1, which was a little suspect because it seemed we had been running longer than a mile. I didn’t have my Garmin on me, so I wasn’t certain, but when the mile marker for Mile 2 popped up shortly after, I was pretty sure the markers were off. My time for the run ended up being 20:39, which, if the course really was 3.2 miles, would put my pace at 6:27/mile.

I know my body. I know how I feel when I’m really pushing myself. I was not running at a 6:27/mile pace.

Case in point: Brian didn’t race that day, and he was standing with a friend of ours, Kevin, as I came in to the finish. Kevin yelled to me, “Smile, Jane!” – and I did. Apparently, Brian said to him, “Well, that’s strange. Jane is never friendly at the end of a run.”

Exactly. Don’t get me wrong; I was pushing myself. But if I could smile, I wasn’t killing myself during the run.

I heard later on that the run was more like 2.8 miles long. Again, I enjoyed the race. I feel like I did well and I had a lot of fun. I don’t want it to seem like I am being only negative about it. But… this was a USAT-sanctioned race. The entry fee was fairly high for a Sprint triathlon at $85. The course should have been accurately measured.

After the race, I was off to have breakfast with one of my best bloggy friends, Dawn, who was in RI for her high school reunion. We talk pretty much every day, so even though it was only the third time we’ve seen each other in person, we had plenty to chat about. Plus, some of her family members came along, and it was great to see them, too. 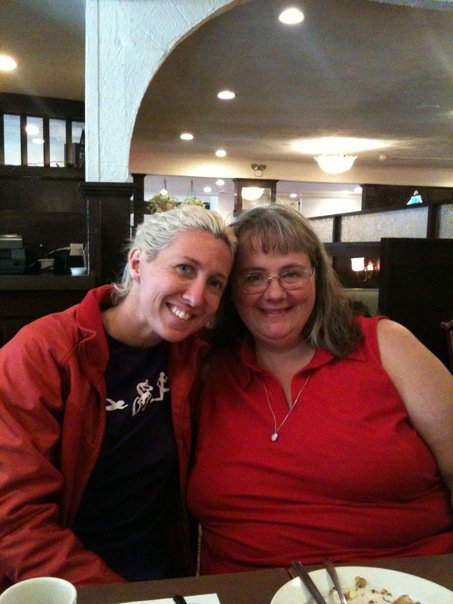 But I’m still mad at Dawn for paying for breakfast.

Finally, that evening it was time for the weekend’s final celebration – Kelly and Graham’s wedding!

As I figured it would be, the wedding was fun, happy and included lots of dancing. It was a perfect way to end the weekend – a joyous celebration on the beach with great friends. 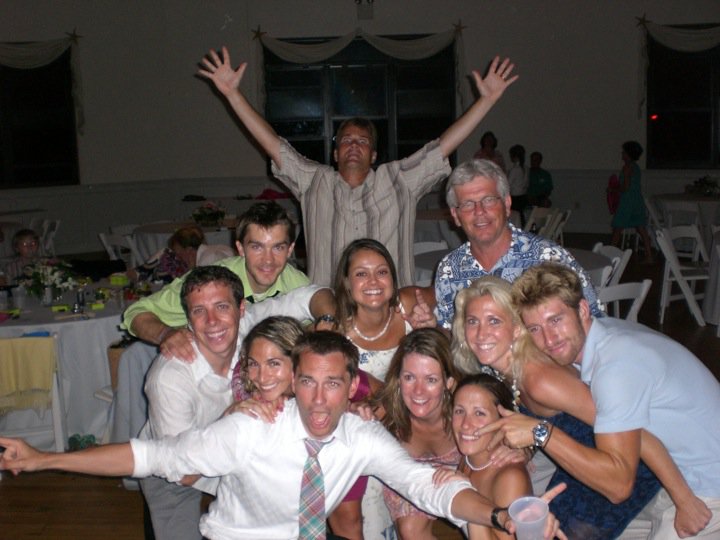