So, I realize I haven’t yet written my race recap, even though the Mystic River Valley Triathlon was 4 days ago.

It has just been one of those weeks… a million things to accomplish and just not enough time to get everything done. By nature, I have a very positive attitude, but at time things just get a little overwhelming and, well, this week has been one of those times. But as I always try to remember, this too shall pass.

Also, I find that sometimes the universe gives you what you need – even if it’s a small thing – just when you need it most. I haven’t worked out in three days with things being so chaotic, and I was feeling pretty upset about that this morning, but then I got a message on Facebook from someone I haven’t seen or talked to in a few months who said I have inspired her to train for an Ironman. It made my day! (And also gave me a little kick in the butt to make sure I get out there and train today!)

So anyway, the race on Sunday. I will tell you, when the alarm went off at 5:00am, I was NOT ready to get up, especially since we had gone to bed just before midnight. Honestly, if we hadn’t already signed up and paid for the race, the pillow may have won the battle that morning… but alas, I had already shelled outt $65, plus Brian had stayed up late cleaning and tuning up my bike. And, the car was all packed up. Backing out would’ve been pretty lame.

On the way to Mystic, CT (about a 45 minute drive), it started raining a little, but by the time we arrived it had stopped and the sun was out. I was psyched for the first tri of the season! 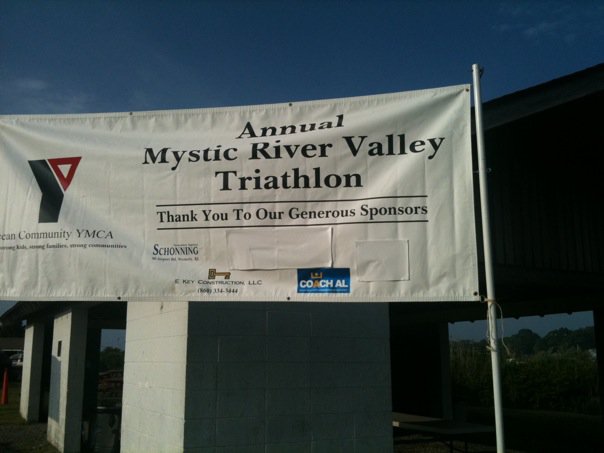 People were setting up their bikes. 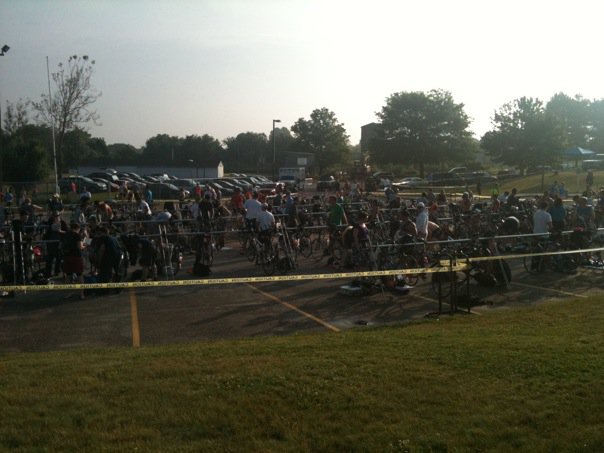 And the water was nice and calm. 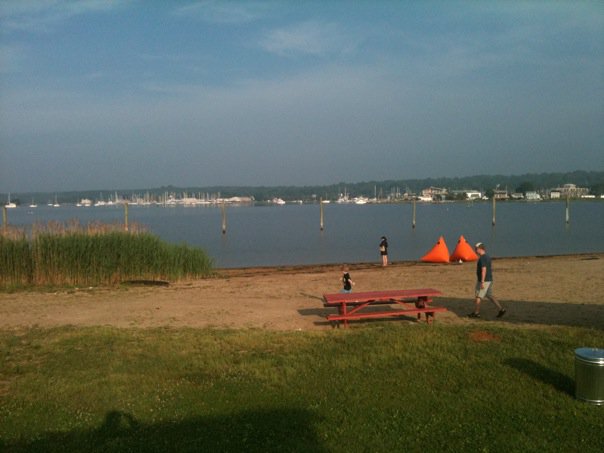 There were 6 of us from our tri group racing that day. 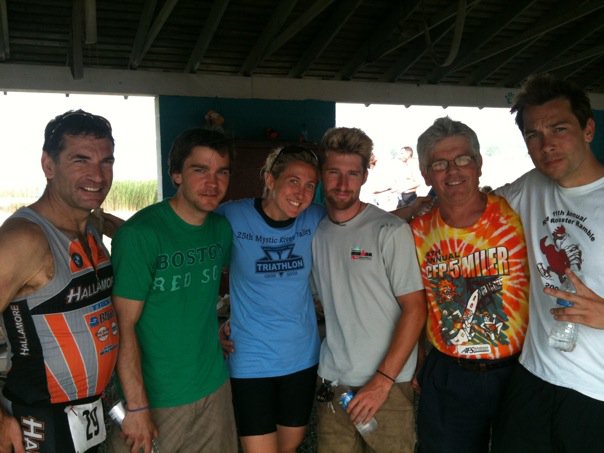 And thank goodness I didn’t sleep in instead of racing! I have found that if we left it up to men, NOTHING IN LIFE would be documented. We have a great little tri group, but like a tree falling in the woods, if no one had been there to photograph the experience, would it really have happened? I don’t want to know the answer.

There were 2 waves at the start – first men, then women 5 minutes after. I always get a little nervous before races, but even more so before triathlons. Even though swimming is one of my strengths, I don’t love swimming in the open water. Plus, the swim portion can be pretty barbaric. You have a bunch of people swinging their arms and kicking their legs all around (and sometimes on top) of you.  In addition to that, you’re trying to make sure you’re staying on course, and getting your breathing in… all while you’re trying to, you know, race to the finish.

I had done a fairly long swimming workout the day before, so my shoulders were still a little tired, but I felt pretty good during the swim. It was a .5 mile route, so I wore a wetsuit and that always helps. My time was 10:57.

[I refuse to share a photo of me coming out of the water. I looked like an alien.]

I thought I was moving quickly in my first transition (T1 – swim to bike), but the results prove otherwise. I don’t know what my problem is in the transitions. Well, actually, I do know my problem – I suck at them. It took me 2:29 in T1. I need to shave AT LEAST a minute off of that.

The bike was next. It’s the longest portion of a triathlon, and it’s my weakest component. I just need to spend more time on the bike; it’s that simple.

There was a spectator who, it seemed, was only there to tell us girls our rank, which was helpful but mildly confusing .(Was he involved in the race somehow? Just a counting enthusiast?) I passed him twice during the bike and both times he told me what place I was in. There were two other girls who I stayed near for most of the bike portion, and they helped push me. Towards the end, the three of us passed the counting guy and he pointed at each of us and said, “15! 16! 17!” as we went by.

And then again with the long transitions! My T2 (bike to run) time was 1:18. I repeat, I SUCK AT TRANSITIONS. By the time I started the run, I saw at least one girl who I had passed on the bike already out ahead of me. Not cool.

My legs were not feeling the run at first, and a lot of girls started passing me right off the bat. I just kept moving, trying to get in the groove, and finally around the halfway point of the 3-mile run, I started to feel strong. The counting guy had moved over to the run course, and there he was, calling out our rank again. I passed him just as my legs started to feel loose, and (at least according to him) I was the 17th girl.

I was able to see all 5 guys in my group during the run, as the course was pretty much an out-and-back, so we got to cheer each other on. I was especially happy to see Brian, who had taken off his shirt in the heat. Rawr!

During the last mile, I passed a lot of the girls who had passed me at the beginning of the run. I felt really good and wanted to finish strong.

With less than a quarter mile to go, I saw Brian and Graham waiting for me, so I knew I was close to the finish. They ran me in and I finished the run in 22:06. Not bad, but once again, definitely plenty of room for improvement.

I have to say, while I felt great right after the race, I was pretty beat that night. And with just a little over 4 weeks until Ironman 70.3 Rhode Island, it’s pretty much go time!