I can still hear Flo telling me the story. She LOVED this story… the story of Barry’s birth. Tonight, I can hear Flo whispering it in my ear. It goes something like this…

Flo loved to entertain. Her husband, Joe, loved Flo to entertain. She was good at it. Easy and perfect. Flo loved company and Friday night “fight” nights were pretty good times to feed all the guys who came to listen to the fights. On one such night in June, 62 years ago, Flo was entertaining, Joe was listening to the fights with his brothers-in-law and friends, and Barry had decided that it was a good time to make his appearance.

But Flo couldn’t just leave because she was in labor. She wouldn’t think of interrupting the fights. No way. She had things to do. She whipped up her specialties, she served drinks, she entertained… all the while feeling stronger and stronger contractions by the hour. As the eleventh hour began to approach, Flo called her sisters and her mother to let them know that the baby was going to come. That’s when things began to fall into place rather quickly. “Leave it to the women,” Flo would say while telling her story.

The hospital was about a 10 minute drive. And within minutes of arriving, Barry was born. Friday night, June 11. Barry was Flo and Joe’s second little boy. They would go on to have a 3rd little guy, Rick, a couple of years later.

But this is Barry’s story.

Flo told of holding her little boy, Barry, for the first time and how blessed she felt to have him. She and Joe had been married for 7 years before their older son, Stephen, arrived and she was sure that she would never be so blessed again. But here he was, another beautiful little boy. And I think that whatever Flo whispered to Barry on that Friday night in June must have stayed with him forever. Barry loved his Mom. And she loved him back. Barry made her laugh. Real laughter. Raucous, fabulous laughter. Right to the day she died.

I can’t help thinking of Flo tonight and the gift she gave to the world. Barry. Yes, he gave her a run for her money in junior high and high school… his mind and his creativity working overtime, every day, and his charming good looks wiggling him out of any trouble he managed to get into. I remember going to Barry’s 25th high school reunion and a woman whom I had never met coming up to me and saying, “So you’re Barry Couto’s wife. I wanted to meet the woman who would marry Barry Couto.”

I smiled. We talked. I told this stranger that I didn’t know Barry back then, but I told her of the man I knew. We ended up laughing and hugging and laughing some more. Later, when I told Flo of this little incident, I could see the brain fumes… like who would ever say anything about her Barry. That was the way it was.

I think of Flo tonight as I see her baking a special cake and having exactly the number of candles as Barry’s age. I see her putting together a special photo album or a collection of mementos from his childhood… or his children’s and grandchildren’s. I see her marvel at the man he became… a magnificent man and son and father and grandfather. A loyal friend and incredible entrepreneur. A man who doesn’t understand the meaning of the words NO or CAN’T. A man who fits 48 hours into every 24 and still has time left over for anyone, anytime, anywhere. A man with more love in his heart and joy in his soul than can be measured.

Yes, Flo knew the blessing of this little boy who entered their world 62 years ago. She knew. 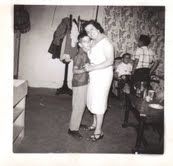 HAPPY BIRTHDAY, HONEY! I LOVE YOU! Your angels are celebrating with you, too! I can hear them…