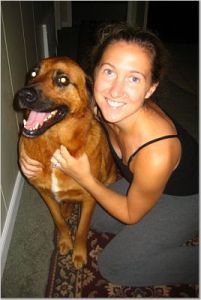 My Big Boy, Bismarck, hadn’t been acting like himself for a little while. I had taken him to the vet about two weeks earlier because he seemed more tired than usual, just not “right.” The vet hadn’t found anything wrong.

But on this day, things were really not right. He seemed to be laboring to breathe. He couldn’t chase the ball (his favorite activity) for long without becoming fatigued.

Very worried, I called the vet and made an appointment for that day. My mom came with me. It was a Friday.

As soon as the vet started looking him over, I could tell by the look on her face that she was concerned. She tested Bismarck’s blood and his white blood cell count was very low. She kept on asking me questions… questions that she wouldn’t have been asking if she thought things were OK with him.

The vet then told me she would call ahead to the 24-hour Emergency Veterinary Hospital in RI because I needed to take him there right away.

My mom drove while I sat in the back with Bismarck. On the way, I called Steve at work and told him to meet us there.

After many more tests, we were told by the emergency vet that at 5 1/2 years old, Bismarck had terminal Gastrointestinal Lymphoma.

They were being optimistic when they said we could expect him to live 6 more months… 8 weeks later to the day, on Friday, July 27, 2007, we said our final, painful, heartbreaking good-bye to our Big Boy.

I didn’t realize that today was the anniversary of Bismarck’s diagnosis until this afternoon, when I was out on my bike. In the middle of a beautiful ride through the park, today’s date popped into my head and it brought me back to that day three years ago… where I was, what I was feeling, who I was with.

It was interesting, reconciling how devastated I felt during the events of that day with how wonderful I felt on this gorgeous, late-Spring afternoon three years later.

Because today, as I rode my bike near Brian’s house, I knew that when I got back there I would be greeted by three happy dogs, Ryder, Seth and Tansy, tongues out and tails wagging.

I wish Bismarck could have met Seth and Tansy. But even though he never did, I know he sent them to me and Ryder.

And today, I know I was surrounded by my four dogs… three with me, and one in my heart.

And today, I felt happiness.