One of the first real conversations I had with Brian was about dogs. Somehow, dog lovers always seem to flock to one another, and this was one of those instances.

It was the second Red Rooster Ramble 5-miler (RRR) Thursday night race that I attended. The first one I went to, the week before, was the first time I met Brian.

(Side note: since that first race I went to was the 200th RRR, there was a photographer from the local newspaper there. I think it’s kind of cool that Brian and I will always have a photo of the two of us on the first night we met, August 6, 2009):

Anyway, on that first Thursday, I remembered Brian telling me that he never misses a race, but on this second Thursday, I hadn’t seen him at the start. As I got close to the finish of the race, however, Brian was standing there. And he was holding a cute dog on a leash.

After I finished, Brian came over to where the runners gather after the race and I was introduced to Tansy. She wasn’t even a year old yet, so she was very excited and gave me tons of kisses. I thought she was adorable.

We all head to a local pub for pizza and beer after the RRR each Thursday, so once we were inside, Brian and I had our dog conversation. 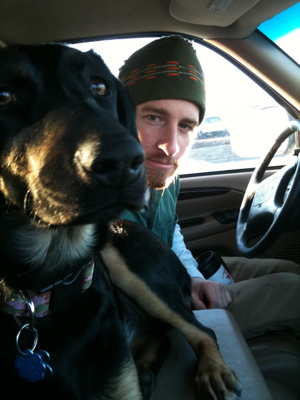 I learned this on our first date, when Brian took me on his boat to a nearby island, just the two of us – and Tansy.

I learned this when Brian would pick me up from the Providence bus station each time I came home from NYC. I’d open the door to his truck and before I could even see or say hi to Brian, I was covered in wet puppy kisses.

And I learned this when Brian would drop me back off at the Providence bus station for my sad ride back to the city. I could see the backs of two heads – Brian’s and Tansy’s – through the window as I watched his truck drive away.

It can be hard to be willing to open up your heart to another dog. Within a two-year span, I had lost one dog, Bismarck, and then had to wrap my mind around sharing custody of Ryder and Seth with my ex-husband.

But, of course, when I fell in love with Brian it was impossible not to fall in love with Tansy, too. She is so sweet. She makes me laugh. She wants Ryder and Seth to be her best friends so badly.

She loves jumping on my parents’ bed when she stays over, and tries to chew the Velcro rollers out of my mom’s hair. She has a knack for destroying my nephews’ toys in the toy bin at my parents’ house. She loves, loves, loves the water.

And when I have to spend weeks without my own babies because they’re with my ex-husband, Tansy seems to instinctively know that I need just a little more love.

As much as I love Brian, as wonderful as he is, if he didn’t love dogs, we would have a problem on our hands.

Thankfully, he’s a boy who love his dog (now dogs!).

And thankfully, I get to love Tansy, too.

A boy and his dog was last modified: July 10th, 2011 by Jane Couto Govednik
SHOWHIDE Comments (7)

A boy and his dog was last modified: July 10th, 2011 by Jane Couto Govednik