Every day. Every single day. I’m not kidding when I say this. Every single day since I met Barry, someone, somewhere has asked if Barry is Dustin Hoffman.  One recent incident involved a tollbooth lady on the Newport Bridge last Friday evening.  She looked at Barry and said, “You’re Dustin Hoffman, right?” And even though Barry politely replied, “No,” I have never seen any tollbooth person so methodically count change while staring at my man, flustered and giggling like a teenager.  She wasn’t… a teenager, that is.

It usually begins with the stare from across a room or restaurant. Then a whisper. Then several people trying not to stare, but staring none-the-less. Or someone passing by will do a double-take. Occasionally, someone will stop Barry and say right out, “Hey, aren’t you Dustin Hoffman?”

Sometimes… well, actually many times… cashiers or vendors or wait staff will insist that Barry not pay for something because he’s Dustin Hoffman. This always intrigues me because Dustin Hoffman can certainly afford to pay for amusement park rides, tourist attractions, tickets of any kind, and meals. Barry always politely insists he is not, in fact, Dustin Hoffman and insists on paying.

Rarely, but it does happen, someone gets rather perturbed when Barry says he is not Dustin Hoffman. Barry has to be careful with these people because he doesn’t want anyone to think Mr. Hoffman is not a nice guy. Because Mr. Hoffman IS a nice guy. Barry knows this because he worked with Dustin Hoffman on a film that was shot here in Rhode Island… every day, up to 12 hours a day, for almost 8 weeks. How Barry got this gig is the stuff movies are made of. It began with Audrey’s 17th birthday…

I will take you back a few years here. I didn’t know Barry back in 1968 when The Graduate hit the movie theaters. But we both remember seeing The Graduate. As Barry tells it, he was with a date… and when he saw Dustin on screen, Barry was startled with the resemblance. When the movie was over, Barry asked his date if she thought he looked like the actor in the film. She said, simply, “No.” I was a sophomore in high school at that time, and I went on a double date with my best friend and a couple of high school guys to downtown Providence to see this new movie that everyone was raving about. I loved the film… and as a matter of fact, I saw my date at my 40th high school reunion just a few weeks ago. When I introduced him to Barry, I reminded this nice guy from so many years ago that he had taken me to see The Graduate. He remembered and he commented on how much Barry looks like Dustin Hoffman.  Random detail here.

Anyway… by the time Barry and I met, he had grown a rather full beard and I thought he looked as much like Al Pacino as Dustin Hoffman. When he shaved his beard a few weeks later, well… Dustin Hoffman was in the room, so to speak. Our kids remember people following us for autographs or a handshake or photographs… and for the free stuff. Barry must have explained a thousand times why it was unethical to pretend you’re someone else for free stuff. “C’mon, Dad. Just once?” was the usual response. Of course, all this time Dustin was starring in blockbuster films, so Barry’s look was easy to notice. He was particularly bombarded with requests for photos or autographs if we were in a more touristy place like New York City, Los Angeles, Martha’s Vineyard, Disney World, concerts or sporting events. But when Barry visited Portugal on one vacation,  it seemed everyone there wanted a piece of Barry.

This brings me back to Audrey’s 17th birthday, May 23, 1995. It was pretty big news that a local film director, Michael Corrente, was filming American Buffalo in Rhode Island and that Dustin Hoffman was starring in the film. Audrey’s one birthday request was to take the morning out of school and head to the set. She thought Mr. Hoffman may walk by or greet the crowds that gathered, and she wanted Barry to get close enough as possible to Dustin for her to take a photograph of them as together. OK. We said yes to this request. I took a personal day from work, Barry took the morning off, and we took both Audrey and Jane to the area where the filming was ready to begin…

And within 5 minutes of us arriving, a huge crowd gathered around Barry. Everyone thought he was Dustin Hoffman. When people realized he wasn’t, it still turned into a party of sorts and people wanted photos with Barry. Now you must understand here that Barry is outgoing and friendly and wonderful, but he is not an attention seeker, nor is he overtly showy. He’s a guy who looks like a movie star. Well, soon television crews were arriving. Barry was interviewed. He was a bit flustered and maybe even a bit embarrassed at all this attention.

AND THEN. And then the director, Michael Corrente, walked across the street from the set to see why Dustin was outside rather than inside. When he saw Barry, Mr. Corrente was stunned.

And this is the movie stuff… Mr. Corrente asked Barry if he’d ever done any acting, because Mr. Hoffman’s stand-in was not available to make the trip to Rhode Island and he was looking for a stand-in. For 7 weeks or so. Every day. No, Barry had never done any acting, but yes he was available. We own a family printing business and our son Keith was more than willing to cover for Barry for this once-in-a-lifetime crazy movie story.

And that was that. That began Barry’s entrance into the world of Hollywood and Screen Actors Guild and a couple of months of real celebrity. Local celebrity. 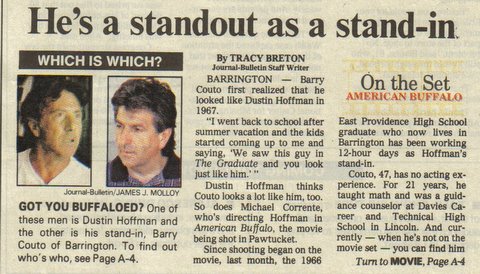 Dustin Hoffman was incredibly gracious and friendly to our entire family, he is one of the funniest people I’ve ever met… ever. 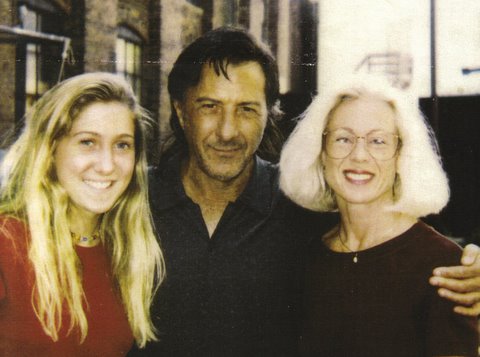 And he, too, was startled by the resemblance. Side-by-side, they could be twins. Just a twist of genes and fate, I guess. Dennis Franz also starred in the film, and you wouldn’t meet a nicer guy anywhere.  He’s a peach.

Dustin also gave Barry a gift for Fathers Day that year… a director’s chair with Barry’s name on it.  It is a wonderful, wonderful gift and memory from that time. 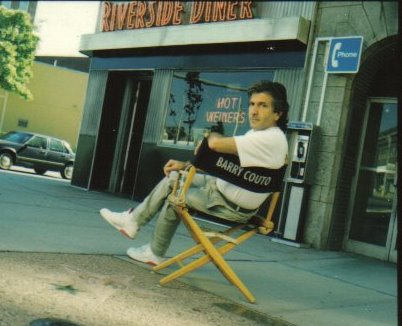 Barry has been asked to do more stand-in work for Mr. Hoffman, but the shoots were far from home and the time management thing with the business and all could not be worked out.

But every day. Every single day. Barry gets the stare. The whispers. The questions. I now call them sightings. Sometimes people are very embarrassed when they have gushed over being in the presence of a celebrity who is not a celebrity… so at least now Barry can say that he has done stand-in work for the mistaken celebrity. People are always happy to hear that they were correct, to some degree. And people love celebrities… even quasi ones, too.

So what’s it like for me?  Hmmmm.  Barry can be oblivious to his look sometimes, so I’m the one who usually sees the stares and whispers and I know when someone is heading right up to Barry with that big smile and “Hey, aren’t you Dustin Hoffman?” I find it charming because most people are happy just to chat or ask a question.  I find it interesting that everyone seems to have a favorite Dustin Hoffman film and people like to talk about films.  I feel good that Barry is such a kind man and never makes anyone feel uncomfortable with their mistake.  Take the tollbooth lady, for example… he simply said that many people have asked the same question and smiled his charming smile. I wonder sometimes why real celebrities do so much hiding… because most people are just curious to see someone famous, talk for a few moments, shake a hand, maybe take a photo and move on.  It makes people happy.  I love the respectful nature of people.  I love Barry’s face and I’m happy that someone famous looks like him!

I wonder why that girl who Barry took on a date to see The Graduate back in 1968 didn’t see it.  Now that’s interesting.

And yes, Audrey got her photo with Dad and Dustin Hoffman.  She got several albums full, as a matter of fact.

What it’s like to be married to a quasi movie star was last modified: May 18th, 2010 by Sharon Couto
SHOWHIDE Comments (16)

What it’s like to be married to a quasi movie star was last modified: May 18th, 2010 by Sharon Couto