My Dad was born in Chicago and grew up in Michigan.

My Mom was born and raised in Boston.

My Dad was a Detroit Tigers fan. My Mom and her entire family have always been Red Sox fans. I was a Tigers fan, like my Dad, during my childhood. After all, I was born in Michigan. But my Dad was in the Navy, and my family didn’t live near my relatives, neither in the Midwest nor New England.

It wasn’t until 1961 that my Dad was stationed at Portsmouth Naval Base in New Hampshire, and then I got a strong dose of what would become known as Red Sox Nation. Like my Dad, I held my own with my Tigers despite the fact that my Nana and many, many relatives lived in the great city of Boston itself and my own Mom was “home” with her Red Sox again. In 1965, my Dad retired from the Navy and my family moved to Rhode Island. Still New England. Still Red Sox all the way, even though they were coming off a streak of losing seasons. But I would not be dissuaded from my Tigers.

In 1967, as the Tigers were being eliminated by the Angels to lose a forced playoff with the Red Sox… well, I became a Red Sox fan. I still remember telling my Dad, “Hey, Dad… I’m rooting for the Red Sox.” He smiled. He knew.

Until yesterday. I went to Red Sox Opening Day with Barry, Keith and Adam. (Um, yeah… I married a Red Sox fanatic!)

And friends, Opening Day was all I thought it would be. And more. The day was unseasonably warm and sunny. The four of us made interesting friends while in line to head to the roof-top deck of the Baseball Tavern, right around the corner from Fenway. The beer was flowing. The fried food was fryin’. Being Easter and all, there was a bit of “religion”… and an Easter Egg Hunt of sorts with some interesting egg messages for that other team. Oh yeah, it was Red Sox vs. Yankees Opening Day… you know, the oldest and most fierce rivalry in the history of sports. Then once in Fenway Park itself, we saw Red Sox legend Johnny Pesky and watched former Red Sox great Pedro Martinez throw out the first pitch. There were two F-16 Falcons and fireworks and more beer. The heart-warming ovation to Mike Lowell. Cracker Jacks… 2 large bags, thank you. Stephen Tyler wowed the crowd with God Bless America during the 7th inning (even though he kept checking for the correct lyrics on the giant John Hancock screen out in the bleachers). And Neil Diamond himself showed up to sing fan favorite Sweet Caroline during the 8th inning.

The intimacy of Fenway. The lights as nighttime came. The majestic American flag billowing from the Green Monster. The Yankee fans sprinkled about… yes, even this added to the magic. Youk and Pedroia, newcomers Cameron, Beltre and Scutaro (the 2 guys behind us started what may become a legendary chant: MARCO pause answer SCUTARO, as in that childhood game MARCO POLO). Okajima, Pap and even Beckett. The color RED everywhere. Smiles. Cheers…

HOME. Home at Fenway. On Opening Day. Definitely one of my 57 Things in 52 Weeks. I literally consumed the history and love and reverence of this team, in this famous place, on this night.

And last, but not least… a hard-fought, incredible comeback, true-to-form 9-7 Red Sox win!

When I talked to my Mom this morning, the first thing she said was, “You saw a great game last night!” Yes, I did. And thanks to Barry, Keith and Adam, I had the most fun I could ever have imagined on this possibly once-in-a-lifetime day turned night. And you know what?… I even think my Dad was smiling down on Red Sox Nation yesterday! 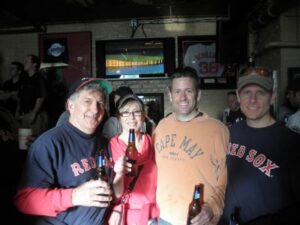 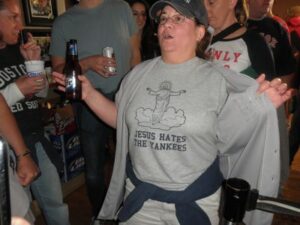 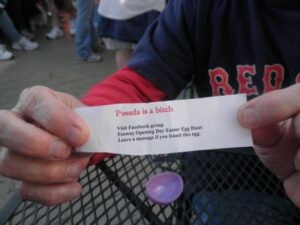 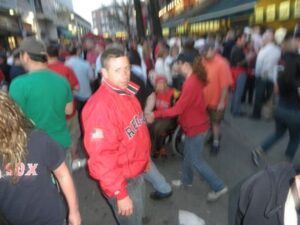 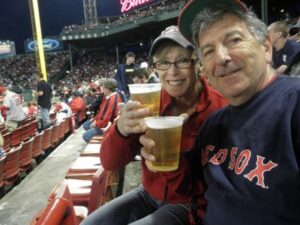 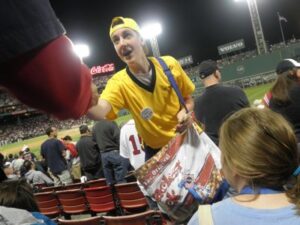 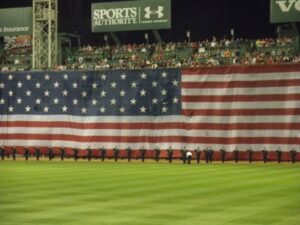