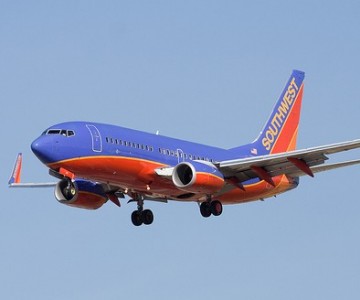 I hate to fly. No, really. I’m not just a little scared. I don’t just not like flying. I am terrified of it.

I know it’s a fear that I share with many people, but with all due respect, my fear kicks ALL of y’all’s butts.

Don’t believe me? Has your fear of flying ever made you cancel a vacation to London – one with free round-trip airfare – ON THE DAY OF THE TRIP? Have you ever single-handedly made a plane turn back around after it had already started on the runway? Yeah… I have issues.

People have told me that the more you do it, the easier it gets. That may be true for some, but for me, it seems like it’s getting worse. And that stinks because it really hinders doing things I want to/love to do, like, you know, travel to different places.

Take my most recent flights… they were sandwiched by 10 amazing days of vacation in Florida (“amazing” does not, of course, apply to the bikini shopping trip), but getting through them involved any or all of the following: worrying, shaking, major reassurance, special treatment and meds. Many, many meds (as in, what was flying higher, the plane or me?).

I have to say – knowing full well that this has turned into a little bit of a “Guess why ELSE Brian is great!?!?” blog – I could not have had a better traveling companion than Brian. Though, while he kiiiiind of knew what he was getting into when he bought the plane tickets for me for Christmas (my conversation with him probably sounded a lot like the first line of this post), I don’t think he was truly prepared for what he had to endure.

Even as my mom told him the infamous story of Jane-making-the-plane-turn-around-on-the-runway. Oh, yes. That story that I had specifically told my mom not to share with anyone because I ended up saying to the flight attendant, who had relayed the “no-go” news to the pilots, “It’s OK, we can go. I’ll be fine.” And off the plane went, to Chicago, without a(nother) hitch, so we could catch another flight there en route to a wedding in Lake Tahoe. But we found that 2 glasses of wine + the high altitude in Lake Tahoe = mom using the story as an ice-breaker to the other wedding guests at our table. And so the story went public. Thanks, mom!

Anyyyyyway, I told Brian even before we got to the airport that I would have to talk to the pilots before the plane took off. This is a little technique I learned from a “fear of flying” online group (don’t. laugh.) that I had joined back in ’03 when I flew to California. The theory is that the more you know about the flight, the more armed you are with information about the flight – and the people involved – the better prepared you’ll be.

I did tell Brian, though, that I feared my time with the pilots would be cut short because we were taking Southwest and we were in the B group. That meant we’d have to wait for alllllll the A group passengers to board and it would be a bit of a madhouse trying to get some time with the pilots and find two seats together. So, just before we were about to board, Brian zeroed in on a guy who seemed like he’d have some authority and went to talk to him. I watched, amused, as Brian and the guy chatted a little and shook hands, then chatted some more. Then Brian walked back towards me with the news: “Yeah, Eddie said we can board right after the handicapped passengers.” Eddie! Brian! My heroes!

That part went off without a hitch… we boarded before those suckers in the A group waiting in line and I asked the first flight attendant I saw to introduce me to the pilots. They were awesome and kind and reassuring, and told me that everything was going to be OK. When I was all set (I wanted to make sure they had enough time to prepare for a safe flight!), I went to find Brian, who had grabbed two seats near the front of the plane. I took my seat next to the window and Brian helped me compile a little list of reasons I shouldn’t be afraid to fly. Oh yes, I also popped my third Xanax.

Just before the door closed, one of the pilots came out into the cabin, looked around, found what he was looking for – me, apparently – and gave me the “thumbs up” sign. If Brian hadn’t been holding my hand so tight, I may have gave him the “thumbs down” sign back because I was starting to feel a little like the antithesis of Obama’s campaign slogan: No We Can’t.

As soon as the door closed, I informed Brian as such. “I can’t do it.” “Let go of my hand.” “I have to get off.” I directed these, as well as a few or more choice, fun, fearful flyer phrases, at him. “Yes you can. You are not getting off. I’m right here,” he told me.

One of the flight attendants came casually walking by, checking seat belts, and must have seen the look of terror in my eyes. “Is everything all right?” she asked.

To which Brian delivered THE UNDERSTATEMENT OF THE CENTURY: “She doesn’t like to fly.”

She saw his warning and raised him one of THE WORST THINGS TO SAY TO A FEARFUL FLYER: “Well, it’s going to be really bumping going up.”

So at least I had that going for me.

She was right… it was pretty bumpy, but I just closed my eyes and buried my face in Brian’s shoulder, asking him: “Are we up yet?” “What’s that noise?” “Is that normal?” as I shook uncontrollably.

Once we were up in the air and the pilot let us know we could use our electronic devices, I was OK. Maybe it was the knowledge that there was no turning back. Or maybe the Xanax finally decided to kick in. Either way, I was able to relax a little – and I didn’t even die of embarrassment when the Captain announced that he wanted to give a shout-out to a “special friend, Jane.”  Then I had a few sips of Sprite Zero and went bye-bye for about an hour and a half, waking up to the good news that we were almost there.

Once we landed, as I updated my Facebook status with: Brian is the BEST flying companion. So patient and calm during my near freak-out on take-off, Brian peeked over my shoulder and said, “Near?” When I asked him how my freak-out measured up to how I prepared him it would be, on a scale from 1-10, his answer was 8. Hey, I tried!

For the next 10 days, I thoroughly enjoyed our vacation – sitting in the sun, going on runs, swimming laps, sight-seeing, etc. – but I definitely had that, “Ugh, we have to fly back” feeling creep up from time to time. We were joined on the trip by Brian’s mother, brother and his brother’s girlfriend. His brother is a pilot, his brother’s girlfriend works at an airport, and his mother has no fear of flying at all, so I was a bit of a circus freak among them. They wanted to know what, exactly, I was afraid of (not in a rude way, mind you, just curiously), and when I couldn’t pinpoint it, Brian – always endearingly protective of me – chimed in that I can’t help what I’m afraid of and that I’m trying my best. (Which is just, like, reason #1,368,465 that Brian is so great, but also way #2,098,794 to make your boyfriend’s family hate you.)

Brian’s brother offered to take me up in their 4-seater this summer to help me out with my fear. Maybe take a little day trip to Nantucket or something. Give me a chance to get familiar with sights and sounds of flying in a different setting. He also called as Brian and I were at the airport getting ready to head back home. He told me he was giving me a big hug over the phone and everything was going to be fine.

By that time, Brian had already gotten special treatment for us again. This time, the ticket agent had given Brian a pre-boarding pass for us to use. As we stood in line, we made friends with the two people ahead of us who were also holding that golden ticket. It was an older woman and her son. They told us that she had bad eyesight and needed to sit together, so they got to board early. I think they were kind of eyeing us like, “What are they in for?” so I told them our deal. “Oh, I can tell you’re terrified just by the look in your eyes!” the woman said. So… I guess we were legit?

I was again able to meet the pilots. The Captain was super helpful and the First Officer was nice, but definitely more into his iPhone. (Probably texting a friend, “We have a Stage 5 Nutjob on board!”)

By the time I found Brian in the cabin, I was feeling much better than I felt for the flight down. I took my seat next to the window on one side of Brian. On the other side of him sat a priest. Which made the movie we decided to watch on our laptop, “The Hangover,” an interesting choice.

Maybe it was the fact that I took 4 Xanax this time (and believe me, I’m not a pill-popper), but I was much, much more relaxed as the plane took off. And about 5 minutes into the movie, I was out like a light. When I woke up, we were almost back in Providence and the movie was over. “How’d you like it? Wasn’t the ending funny, when they showed all the pictures of what happened?” I asked Brian.

“Yeah, it would have been nice to have a head’s up on that. I was sitting next to a priest.”

As we de-planed, Brian had to, like, thank the entire Academy (i.e. the whole crew) for being so great, while I just wanted to exit stage left ASAP. While I appreciate everything, of course I get a little embarrassed of all the pomp and circumstance I require, and I don’t particularly like everyone around me to know I’m a freak. But I’m grateful for everyone’s kindness, so I try to quietly say a sincere “thank you” and then haul it to baggage claim.

We have another plane trip coming up a week from Friday, as we’re traveling to Columbus, OH for the BlogPaws conference, where I’m speaking on the Monetizing Your Blog panel. I’m so looking forward to it, though I’m not looking forward to getting there.

And, of course, I have to get ready for my flight to Nantucket on a small plane this summer. Who in her right mind would pass that up, right?

(Says the girl who gave up a trip to London with free round-trip airfare.)