From the inception of the idea that I could possibly try to train for a Half Marathon… until the moment I finished… was a journey I will always remember.

It began on November 28, 2009, after I completed a 5-mile race that Janie had encouraged me to run. OK. 5 miles. I did it. But how about 13.1? I thought and thought and thought. Then I went online and found the Half at the Hamptons. February 21, 2010. Hmmmmm. I spent many years at Hampton Beach as a kid. I had lived in North Hampton. This race would take me back. Back to my childhood. It seemed perfect. Barry sat next to me as I clicked my information and registered for this adventure. Done. Then I panicked maybe just a little lot and found, online, Hal Higdon’s Novice Half Marathon Training Program. Note the word NOVICE. I didn’t tell anyone but Barry. I guess maybe I didn’t really, really know if I could accomplish this great big goal.

I posted my training calendar near my computer table and began the following Monday. 3 miles was my first run. Sundays were always my long run. My first Sunday was a 4-mile run. I did it. I couldn’t help peeking ahead to those 9 and 10 mile runs toward the end of the training schedule. I did wonder seriously if I would ever achieve those miles. And I kept going. I ran mostly in the late afternoon, and often I would come back home to Barry waiting for me on our front steps or looking for me out our front room windows. I can’t even explain the feeling of his smile and hugs and high fives and “Good job, Honey” as I came trudging home. He is, truly, my great inspiration. He believes in me.

Then… I got the flu. An awful, horrible, bad, bad, bad flu. I sat on my couch for an entire week thinking about nothing but trying to walk from the couch to bed. From my bed to the couch. I didn’t feel that I would ever run again, never mind continue my training. But I did recover, and I began from the beginning. Then my Mom got sick and I was spending every day, hours at a time, with her in the hospital. My Mom is the exercise queen of the entire world, so one afternoon I told her about my Half Marathon… and that it would be in Hampton, New Hampshire. She was so happy for me and my super-ambition, and each subsequent day she would ask me, “Are you going to get your run in today?” I would leave the hospital, and then the rehab center, run… and come back and basically report my progress to my Mom.

Then… Barry was hospitalized for a week with his little run-in with a colonoscopy. Barry’s message was the same as my Mom’s… “Are you going to run today?” I had to. I couldn’t let them down. When I think back, I really don’t know how I did squeeze in those runs.

I told Janie and Brian about my goal over breakfast one Saturday morning in January when Janie questioned why I was running so early that morning. Janie’s eyes lit up with such happiness, and Janie and Brian gave me such encouragement and tips to accomplish this endeavor. The weekend before the Half Marathon, I told our other children about the race… and I had confided in my good blogging buddy, Bacardi Mama, who was amazing with her encouragement to a fellow boomer! By then, I felt good enough to know that I would give it my all. Everyone was so happy for me…

Barry and I stayed overnight Saturday night at the Ashworth Hotel right on the Hampton Beach Boardwalk… exactly where the race began and ended. To say I was nervous would be an understatement. I began to wonder if I could really run 13.1 miles. I had run 11 miles in training, but never the entire 13.1. Sunday morning came with a beautiful sunrise, lots of runners (a maxed out race of 1300 runners) and fans, and that feeling of, “OK. This is it!” When Barry and I pressed the elevator button to head down to the race, the doors opened to Dick Hoyt and his son Rick in that very elevator. It was a tiny, tiny elevator… and the woman with them said, “Come on in. There is plenty of room.” It just so happens that Dick and Rick Hoyt are heroes to me… and I told them so. That little ride down two floors sealed the deal for me to run my race with every ounce of my being.

I felt so happy. Then the race began. The course took me past so many places I had spent so much time… so many, many years ago. There were little motels with little pools along the ocean front. My friends and I used to ride our bikes to these little motels in the summer… and the owners would let us swim in the pools for 25 cents each. Then there were the big, gorgeous homes right on the water that my friends and I used to jump the fences and swim in their pools… for free! (Ah, what I would have done to my own kids if they ever did something like that!) I passed North Hampton Beach, where my Mom and Dad took us for little beach cookouts in the summer. I thought a lot about my Dad during the race. I thought about my Uncle Ed and Aunt Jean, both deceased, who lived down the street from my family. I thought about old childhood friends and wondered where their paths had taken them. I thought about my mother-in-law Flo and how she would have loved to have seen me run this race. I thought about my Mom, who was waiting for my call at home… she knew she could not stand outside in the cold and wind for such a long time. I ran past Little Jack’s, the most awesome seafood place in world… where Barry and I used to take our own kids every Labor Day for $5.00 lobsters. I ran with such happiness and such peace on that beautiful journey… then, a little past mile 3.5, I heard the most wonderful sounds in the world… “Grandma! Grandma!” It was the joyful voices of my grandchildren Taylor and Andrew, with Keith and Nicole and Barry. They had driven the 2.5 hour or so journey north to see me run. They found Barry at the beginning of the race and found me at miles 3.5, 6, 9 and then at the race end. Taylor and Andrew had motivational signs for me! I was so overjoyed and inspired by the sight of them all, cheering and smiling and waving from the sidelines!

I ran the entire race. I ran with the energy of everyone around me… and everyone supporting me. When I saw that FINISH line, I must say that I was elated. I had added Chariots of Fire to my iPod. Yes, I did. Then I heard Taylor and Andrew, Keith and Nicole… and Barry. They were right at the FINISH, cheering and excited and smiling and waving. I sailed over that FINISH line as the announcer said my name.

As I came around the gated area, Taylor was waiting for me with 2 beautiful shells that she had selected from the sand at Hampton Beach… mementos, she explained, from my run. The shells are priceless gems to me. We ate lunch afterward at the Ashworth Hotel. Taylor and Andrew couldn’t wait to give me a gift they had for me… a Pandora Bracelet with a little silver sneaker… to always remember my first Half Marathon. I will treasure this gift forever and think of them at mile 3.5 with their smiles and cheers and signs! Keith checked the times, and my official time was 2 hours, 12 minutes, 40 seconds. It just so happens that the Hoyts came in at 2 hours, 12 minutes, 38 seconds. I am honored that my name appears next to theirs on the official time sheet. I placed 864 of 1300 runners. On the way home yesterday afternoon, Barry and I picked up my Mom and celebrated with a monstrous chocolate ice cream sundae… and I wore my official t-shirt, hat and medal. My Mom was so proud (and look how great she looks after her “set-back”!).

When we arrived home, we discovered a roomful of purple balloons that Audrey and the boys surprised me with! What a perfect ending to a perfect day. Or, more accurately, a very interesting and challenging and exhilarating 3 months of training! 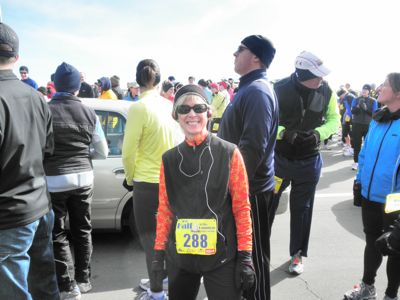 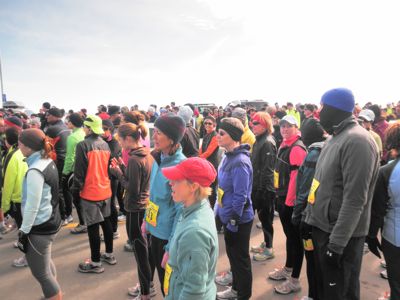 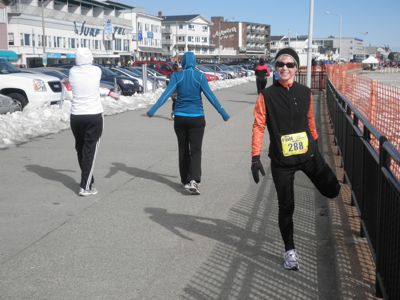 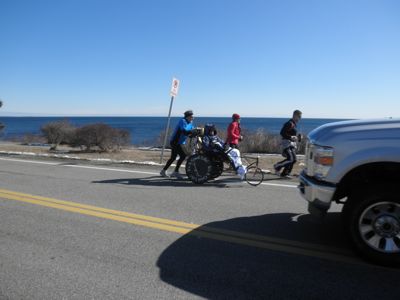 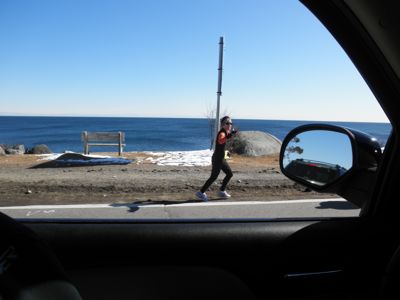 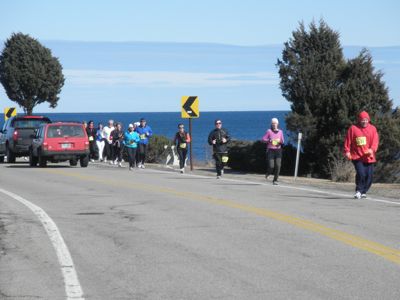 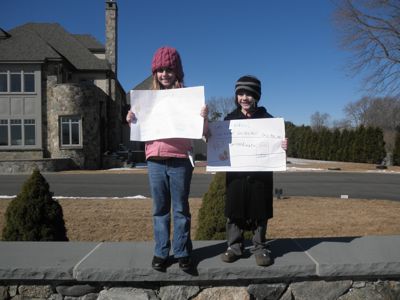 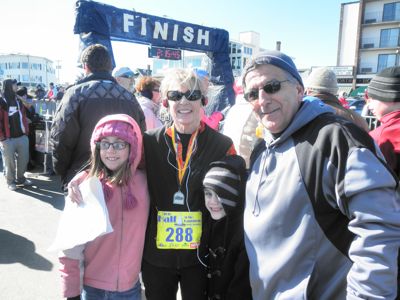 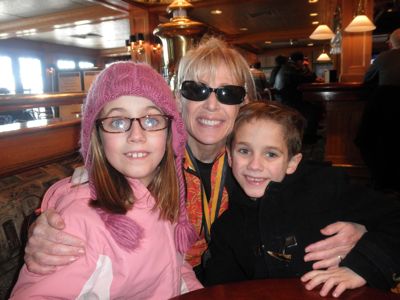 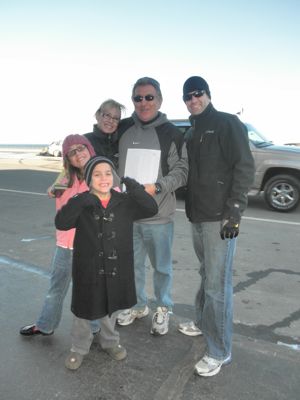 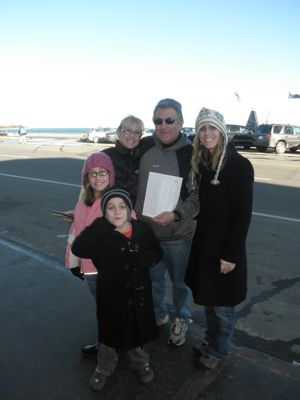 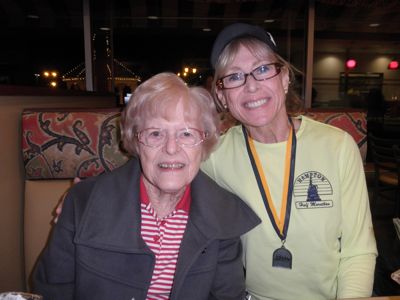 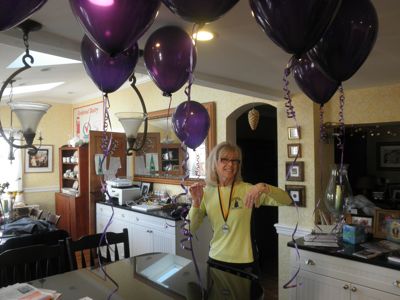 Half Marathon at the Hamptons was last modified: February 28th, 2010 by Sharon Couto
SHOWHIDE Comments (12)

Half Marathon at the Hamptons was last modified: February 28th, 2010 by Sharon Couto