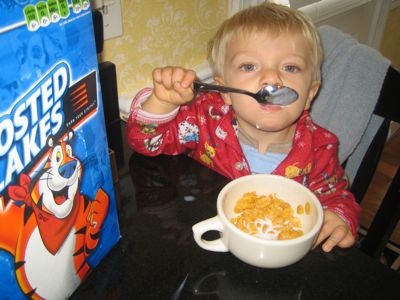 I’m wondering if Barry’s lifetime love affair with Kellogg’s Frosted Flakes has somehow altered the code of his DNA to store long-term cereal preference information in his grandchildren.  How else could I explain the “recipe” for the scientific phenomenon I have discovered… the one I will call “The Tiger of Molecular Biology.”

Here’s my research evaluation in a nut-shell… or corn kernel, as the case may be.  Since I’ve known Barry, he has loved Frosted Flakes.  Having a box of these things in the house is like having water.  It is necessary. It is his guilty pleasure, sometimes as breakfast (covered to the brim with cold milk), oftentimes as a snack (ditto: milk), and other times just handfuls of crunch right out of the box. And it has to be a “fresh” box so the flakes are crunchy.  That royal blue box with the friendly tiger… the very sveltely muscular friendly tiger as of late… has stared out at me from many, many cabinets over the decades.  Barry has told me that Frosted Flakes were his childhood favorite, too, and that’s why I hypothesize that his DNA has been altered, along with the histories of everyone to follow.  Yes, the “Tiger Effect.”

So it’s no mystery that when my grandchildren come to visit, they have DNA-induced radar that takes them to the upper cabinet to the right of my refrigerator for Pop-up’s “Flakes.”  Transmission of genetic information has already decided this.  But none of them has achieved the transcription as early as Audrey’s 16-month old Henry.  The matching of the sequence is perfection… and I have the photos to prove it to the scientific community.

Yep.  Henry came to my house with his brother Benjamin yesterday morning while Audrey headed to the YMCA.  Benjamin immediately headed to the puzzles.  Henry immediately stopped to the right of my refrigerator, looked up at that top cabinet and said, “Fwakes.”

Henry pointed at the top cabinet like he couldn’t believe something was being lost in translation here.

I opened the cabinet and there was Tony all right… the Tony whose own father had already wrapped a genetic cereal enhancer around my husband, and now his grandchildren.  Henry is the latest evidence.

I took down the brand new box… and before I even had time to rip open the top, Benjamin came running from his puzzles in another room.  His cereal sensors were on high alert.  I mean, he’s programmed this way.  I sat both Henry and Benjamin on my kitchen stools and went about my work.  I had never given Henry Frosted Flakes before this, so I carefully gauged my movements.  Bowl for Benjamin.  Henry wanted one, too. Pour the “fwakes” for Benjamin.  Henry wanted “fwakes” in his bowl, too.  Milk.  Same for both… filled to the top of the “fwakes.”  Spoons.  Big boy ones.  For each.

Then Pop-up’s code really settled in.  Those little guys sat at my kitchen counter and enjoyed those Frosted Flakes like they were bonded to the taste by some mysterious genetic expression that had settled comfortably into their very DNA.  Hey, wait… that’s exactly what had happened.

Henry reveled in the moment.  Benjamin reveled in his moment.  And I watched Pop-up’s little progeny in awe as science played one of its GR-R-REATEST little games. 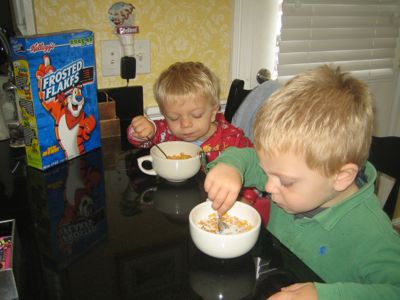 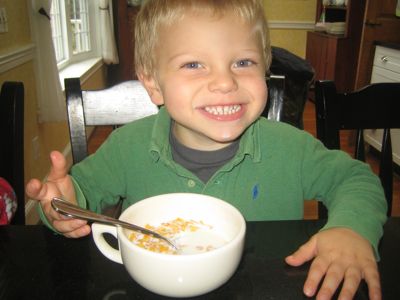 Ah… and the radiant smile comes from Pop-up, too!