Yesterday, Barry and I spent a perfect afternoon at the beach with our son and daughter-in-law, Adam & Aimee… and their three beautiful children, Maddie, Jake and Dylan.

The end-of-summer New England day was about as perfect as perfect could be.  The sky was soft blue with wisps of clouds and the sun cast those unmistakable September shadows… the long and low ones that tell us that the earth has spun a bit and days of less sunlight are on the way.  The moon will be taking over for awhile. 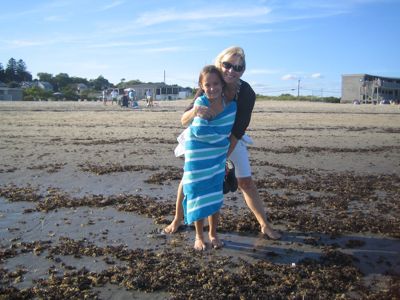 The sand sparkled in an entirely different way under the September sun.  This is the first thing Maddie and I talked about on our walk along the shore as we watched Auntie Janie swimming… swimming way out, farther than Maddie would dare to go right now.  We talked about how the sand is made up of tiny, tiny particles of rocks that have been pulverized by surf and rocks over thousands of years.  Our bare feet dug into the sand, cooler now than it had been just a few days ago.  As we approached a part of the beach covered with seaweed, Maddie talked about finding crabs… and her story of getting bit by a crab in the water, only to run out and stepping on yet another one.  Ouch!  Crab stories are wonderful fun coming from the memory of a precocious 8-year old girl.  We talked about Auntie Janie’s wetsuit… and Maddie wanted to know all about what it is made of.  I explained that the wetsuit not only keeps the swimmer warm, but it is also buoyant, which helps the swimmer stay on top of the water better.

All this time, Maddie and I were walking under the warming rays of the late afternoon sun, talking away and watching Auntie Janie swim back and forth way out beyond the waves.  We talked about Maddie’s winter swim team, and how she was brave enough to dive off the block… but she explained that she still needed some practice in this new endeavor.  Maddie’s enthusiasm for swimming on a winter swim team for the first time is precious and inspiring because she is not afraid to start something brand new.  Maddie is a dancer… and swim team will be a fun team sport for her.

Maddie talked about the stories that she wants to write, and how she had taken notes to remember these story ideas.  I know that she will bring these stories to the page and to life.

Maddie and I talked about how she wanted to swim way out in a wetsuit some day, as she kept a keen eye on Auntie Janie’s movements.  We talked about how long someone could stay out there in a wetsuit… and then Maddie saw that Auntie Janie was headed back into shore.  Maddie said, “I”m going to swim out to meet her!” and she quickly handed me her warm towel that had wrapped her from the chill in the air. 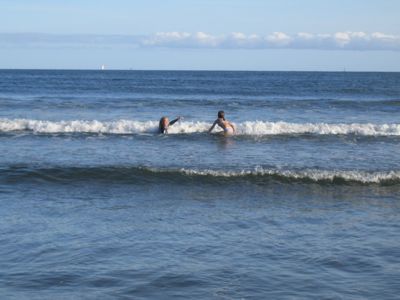 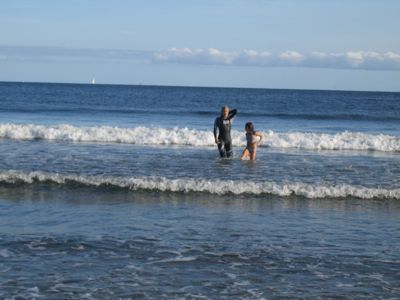 … and I thought to myself, I didn’t spend one penny… but I spent the most priceless 30 minutes that any grandparent could ever spend.  Walking and talking. Sand and seaweed and crabs and wetsuits and swim blocks and story ideas and waves have never meant more to me than they did yesterday.

Walking with our beautiful Maddie.