My husband Barry is a very athletic guy.  I will admit here that his athletic prowess is one of the things that initially caught my eye.  Well, that and his great legs in those shorts the first time I saw him.  But getting back on point, Barry can do just about anything when it comes to sports.

He grew up on basketball courts and has an enormous love for the game.  Same with baseball.  As a young man, he picked up tennis and golf.  He even taught me to play tennis and convinced me to take golf lessons.  And skiing.  When our kids were small, we began skiing as a family and he and I became okay enough to almost keep up with our kids on the slopes.

But he can’t swim.

Barry is also a fast runner, but due to recent hip, back, leg… you get it… things, he basically should not be doing that particular thing.  And he can cycle pretty fast, too.

But swim?  Nah.  From the moment the kids could recognize the concept of awkward… well, this defined Dad as a swimmer.  I think it first became apparent one summer long ago on Martha’s Vineyard.  There is this little bridge on the bike path that people line up to jump from.  It seems easy enough, but when you’re standing on the wooden railings of that little bridge, the enormity of the jump sinks in.  You’re up pretty high. The water below is churning and the current rips under the bridge on the other side right out to the Atlantic Ocean.  It’s almost imperative that you jump… then swim fast to the edge.  For each child in our family, that bridge became a sort-of rite of passage.  “Maybe next year…”  for the littler ones.  Then next year would come and they’d climb up on those wooden rails, pause, think, pause again, then soar into the air and free-fall into that churning water below. This is Janie, pausing, thinking… before her soar… 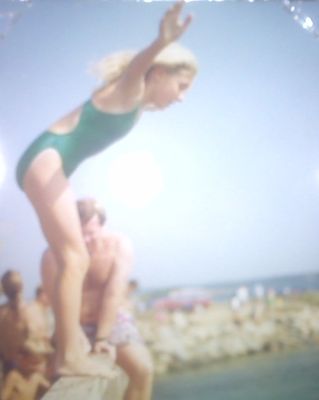 Of course, Barry and I had to jump the first year, and each subsequent year of Martha’s Vineyard family visits, because we are so, so… crazy courageous.  I could swim to the edge and pull myself up on the slippery boulders.  But Barry couldn’t.  He would swim with the current… but not move one inch.  He was strong enough to sustain his body, but not adept at moving his body. It was funny. And even Barry laughed at his lessons at how not to swim.

The funny part is that Barry knows everything anyone could ever know about swimming because Audrey and Jane became such wonderful swimmers.  And now the grandchildren…

But Barry is strong-willed and persistent, and even at 61, he wants to learn how to swim.  So last night, when Jane and I were headed to the Y, Barry came along.  He looked so cute in his long, beach-style swim suit… but when he put on a pair of goggles, my heart melted.  Jane began her zillion laps and I hopped into the Leisure Lane with Barry.  I will tell you here that I am not a talented swimmer and I’m not a fast swimmer, but I know how to swim.  Barry and I worked together for about 45 minutes… working on free-style breathing.  Breathing is what was holding him back.  And breathing is… well, necessary.  He kept swallowing water while trying to breathe because his kick was too strong to allow the time to rotate his head.  Well, that was my amateur assessment.

Well, after about a half hour, Barry did one complete lap of free-style with rotating breathing!  I am so proud of him.  And he’s going to come back to the Y and work his way up to 2 laps.  A little at a time.

So now I can say that Barry can swim.  I think it’s time to return to that little bridge on the bike path with the wooden railings on Martha’s Vineyard and show the kids just what Dad really can do… except with the grandchildren along this time!