I wrote in my previous post that Flo, my mother-in-law, loved boys.  This is the proverbial understatement.

But I always suspected that somewhere in her psyche was lurking the mother of a daughter.  I often teased her about this.  “Come on, Mom, you know you would’ve loved a daughter,” I would say to her.  But if Flo was one thing, it was stubborn, and this teasing would send her into a litany of reasons why boys are so much easier than girls.

Ah… girls.  Flo had two sisters.  She had several nieces whom she adored.  And then there were her granddaughters, Cassie, Audrey and Jane.  Flo loved these girls.  I will never forget clothes shopping for my girls with Flo.  She could find something pink in an ocean of blue.  She loved frills and ruffles to the point where I had to tell her to stop.  Audrey and Jane loved it when Nana Flo bought them underwear because it was always fancy and ribbony and appliqued with things like pink roses.  I always bought them sensible, white easy-to-wash stuff.  Bor-ing.

Then came the great-granddaughters.  3 in a row.  Taylor, Maddie and Chloe.  Pink again.  I remember shopping with her for baby showers… we knew Taylor and Maddie were girls.  Seas of pink.

Again, I would tease her about her fondness for boys.  “Doncha just think you would’ve loved having a girl?”

A couple of years ago, while in a restaurant with Barry, Audrey, Jane and me, Flo went on a mini-tirade against girls.  Something “girl” had gotten her all riled up and she went on and on about girls.  Barry listened patiently for a bit, and Audrey, Jane and I just kind of knew to let it pass… but Flo was relentless.  Finally, Barry said firmly, “Mom.  Look around you.  I HAVE TWO GIRLS.”  Flo didn’t miss a beat.  She used that little fact that Audrey, at that time, had given Barry 3 more boys!!

Ah.  Flo.  I have been thinking of her so often lately.  Maybe it’s the first anniversary of her passing that’s coming.  She’s around.  She’s everywhere.  There are yellow balloons everywhere I turn.

But there’s also something else.

When Audrey had Henry last June 17th… her 4th boy… Flo came to visit Audrey and her new great-grandson.  Flo held Henry tight and swaddled him like only she could do.  She was a boy expert and she soothed him like magic.  That day, for the first time, Flo told Audrey that some day she would have a little girl.  I was there.  The words took my breath away for that moment.

Audrey said, “Oh, Nana.  I’m not thinking more babies or girls.  I have my boys.  Just like you.”

Flo said, “Darlin’, I’m making something for you.”

Flo smiled.  Less than 2 months later, Flo passed away on August 8th.  When Barry and I were cleaning Flo’s apartment and sorting through her things, I found her knitting/crocheting basket.  Flo loved to knit and crochet and she made the most exquisite things for just about everyone she knew.  In her basket was a skein of yarn with knitting needles square in the center of one of her creations.  The yarn is pink.  The creation is a bootie.  A pink hat is already finished.  From Flo’s hands and most especially from her heart.

Flo had at some time tied a little bell around the handle of the basket.  When I picked up the basket, the bell rang its little song.  From Flo.  From heaven.  I cried a river that day, but if ever there were such things as messages from heaven, that was it.  I have kept Flo’s knitting basket exactly as I found it, yarn and needles in place.  I often ring the little bell… 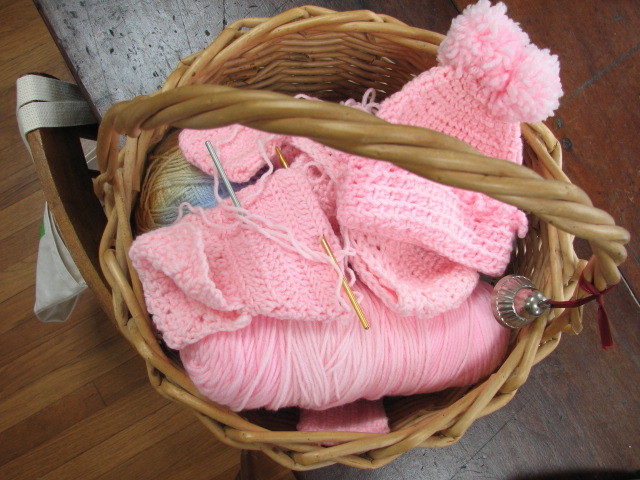 Flo is still sending her messages to us… but this one is all about girls.  I think she’s telling me that I was right all along!