We got away this weekend to D.C. – and it was amazing.

Hershey invited me to their Night at the Museum kick-off at the Smithsonian. For me, this was a no-brainer. I’m a BIG fan of Hershey – have been for 30 years and 11 months. And, I’m a big fan of the Smithsonian. My parents used to bring us there every summer as kids, all the way through high school, so the thought of starting that tradition with my own sons was very intriguing and special.

Matt and I decided to leave with the kids on Friday afternoon. His Aunt Nina (who is like a true Aunt to me, as well) lives in Maryland, so we thought it would be the perfect opportunity to drive in on Friday, visit with family and spend the night at her house. (A BIG thanks for Aunt Nina for the fun weekend!)

Our drive was quick and easy – which we were thanking the stars above for, considering it’s an 8 hour drive – and toss in the unpredictability of 4 boys, 4 and under, we just never know what to expect in our travels! We wanted to take full advantage of being in Washington, D.C. so we headed out to see the monuments with the boys at 8AM Saturday morning. There was nobody there! It was so empty, we actually were worried that our car was going to get a ticket because nobody else was parked on the streets. I’m so glad we got there early though, because it gave us plenty of time to see the Washington Monument, the World War II Memorial, the Capital, the Lincoln Memorial and the Vietnam Memorial. What was the most special for us was the chance to get photos of the boys at everything. I was pregnant with William the last time I was at the World War II Memorial. So being there, with him… it was, well… oh-so-special – not to mention being there with his 3 brothers! If you had told me 5 years ago I would have 4 sons in 4 years, I would have laughed out loud! 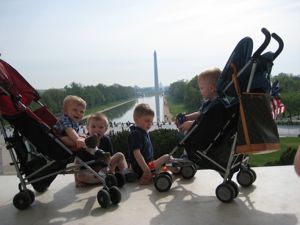 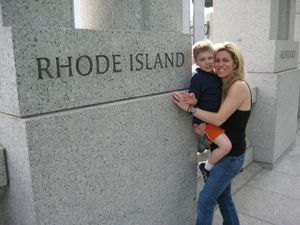 And truly, the weekend was about William. It was William who escorted me to the Hershey event! I knew William loved the first movie, Night at the Museum, so I had a feeling this event would be right up his alley. I was very correct!

William and I kicked off our Hershey event with a pizza party – joined by fellow bloggers and their children (with the exception of Liz from Mom 101 bringing her nephew, which I thought was the nicest thing in the world!). I love smaller events like this because you really get the chance to meet other bloggers, and a lot of these bloggers I have been reading for a couple of years!

Colleen from ClassyMommy is a very good friend of mine, but I had never met her daughter Kenzie before. William absolutely adored her. It was great for me because there was a group of us that had kids the same age, so we hung out together all night – Trisha from MomDot and her daughter, Charlotte, Vicki from The Mummy Chronicles and her daughter, Regan and Linda from Sundry Mourning and her son, Riley. William was just in awe of the 3 little girls – I mean, like trying to hold their hands all night, totally in awe of them!

After our delicious pizza party and (of course!) chocolate fix, courtesy of Hershey, we all headed via shuttle to the Smithsonian. I don’t know if you’ve ever been to the Smithsonian before, but to be there at night… with the place completely empty, for a private tour of the Museum… it was incredible. We kicked off our Smithsonian experience in the IMAX theatre there, with Abraham Lincoln, who did come “alive” (we all kept looking at this “statue” wondering if it was an actual man!) and he gave us some information on the Smithsonian and his “Hollywood” experiences in the new movie. We then got to see an extended never-before-seen trailer of Night at the Museum: Battle at the Smithsonian AND a never-before-seen commercial for Hershey Kisses. William and Kenzie (Colleen’s daughter) both thought the commercial was very “cool” – so they definitely dazzled the little ones! William explained the whole commercial to my husband on the phone after we got back to the hotel. I have to say, it’s a very clever commercial! 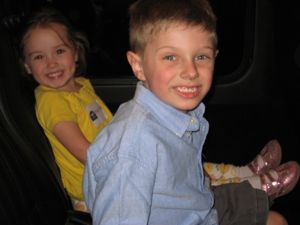 After out IMAX experience, we got an amazing VIP private tour of the of the Smithsonian’s National Air and Space Museum, which inspired the new movie. 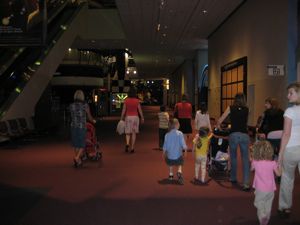 It was absolutely captivating and entertaining and fun and oh-so-very-informative! The kids had fun playing with each other and running around and looking at the amazing sights! 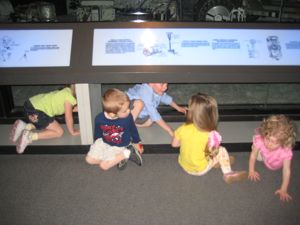 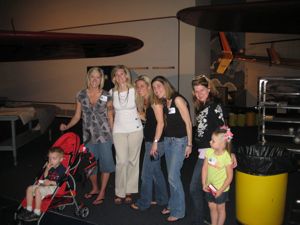 William was head over heels for the 3 beauties he was with – Colleen’s daughter, Kenzie, Trisha’s daughter, Charlotte and Vicki’s daughter, Regan. I can’t say I blame him – they were absolutely gorgeous little girls.

William and I headed back to the hotel around 10:15PM with some of the other bloggers (with kids 4 and under). The older kids got to stay and enjoy a “How Things Fly” show and enjoy a late night viewing of Night at the Museum movie with s’mores! William tried his best to stay up for that – I even let him fall asleep in his clothes trying to make it up last 11PM – but the little guy was out like a light by 10:30PM.

The next morning Hershey put together a cozy breakfast for us – they had William with the donuts, and tons of Hershey treats to take home! William made sure he got enough for his brothers, which now… he won’t let them touch!

Thank you so much to Hershey. You put together a fabulous night for us bloggers and our children. I loved meeting for “real” so many bloggers I have loved and adored for such a long time – Alli from Blissfully Domestic, Liz from Mom 101, Trisha from MomDot, Vicki from The Mummy Chronicles, Renee Ross from CutieBootieCakes, Linda from Sundry Mourning, Melissa from Suburban Bliss and Stephanie from And Twins Make 5… not to mention the chance to hang with my friend Colleen from ClassyMommy! 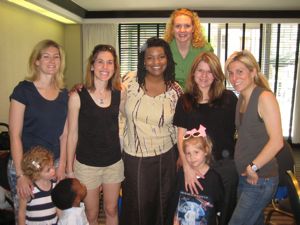 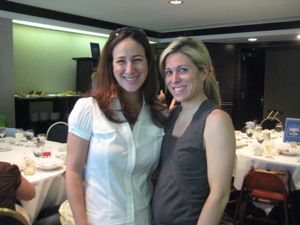 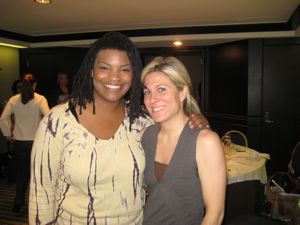 (This photo is dedicated to the most unforgettable woman I have ever met – the amazing, most beautiful! Renee from CutieBootieCakes! I’m waiting to hear back from her if I can post a photo of her gorgeous Mekhi! Renee – I absolutely adored meeting you – FINALLY!)

With 4 sons, I very rarely get the opportunity to do something special one-on-one with each of them. This was the perfect chance for William and I to be together and have tons of fun – all at the same time. I cannot thank you enough for this wonderful trip and opportunity. It was amazing. We’re a Hershey-loving family – just ask Reese’s – they’re at the house all the time! 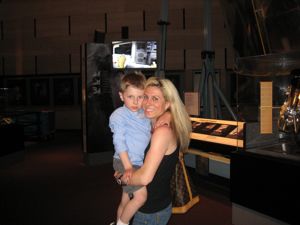 Hershey Company has partnered with Twentieth Century Fox’s Night at the Museum: Battle of the Smithsonian and are offering 5 lucky fans the amazing opportunity to spend the night at the Smithsonian! If you find a museum key inside the wrapper of a specially marked Hershey product – you’ve won! Now through October 31, 2009 – be on the lookout for keys in Hershey Kisses, Reese’s Pieces, Whoopers, Good & Plenty, Milk Duds, Reese’s Peanut Butter Cups Miniatures, Hershey’s Miniatures, Reese’s Peanut Butter Cups 8-Packs, Kit Kat Wafer Bars 8-Packs and Almond Joy Candy 8-Packs. Good luck to everyone! This is such a once-in-a-lifetime opportunity! Also – let the excitement continue by heading over to www.Hershey.com/nightatthemuseum to enter daily and “Unleash some Loot!”