Over the years, I’ve met many wonderful people I probably never would have met had it not been for my dogs. Despite their large size, my dogs must look pretty approachable when I’m out on a walk, playing with them at the park, or even taking them for a ride in the car. And I’ve found that these complete strangers are usually eager to guess my dogs’ breeds.

I don’t think anyone has ever guessed wrong about Ryder. “Is she a Black Lab?” they’ll ask.

And of course, the answer is yes. Just look at my beautiful girl. She is, indeed, all Lab:

But Seth is a bit of an enigma.

All I know for sure is that his is a mixed breed, with the marking and traits of many different breeds that could make up that mix.

But that does not stop people from offering their guesses and opinions – or sometimes declaring with absolute certainty – about what, exactly, Seth is.

As a side note here, I find it funny that people hardly ever ask, “What kind of mix is he?” or “Is he a mutt?” Ususally, it’s, “What kind of dog is he?” I wonder if people think that I would be offended by the assumption that he’s a mixed breed (which, of course, I wouldn’t be). But I did learn my lesson once from a purebred snob. I was at the dog park years ago when woman arrived with her puppy. She (the puppy!) was black and white and very furry – so adorable. She looked like a mixed breed to me, so I asked, “What is she a mix of?” The look of horror on this woman’s face told me I had made a major faux pas (in her mind, at least). She told me that the dog was a purebred something (to be honest, I completely forget which breed), and went on to explain that she had paid a lot of money and traveled to North Carolina to get her. My bad, lady. My bad. I happen to think that every dog should be loved and pampered and made to feel special. But it makes me understand why people tend to stay away from the “mix” word when asking about Seth (even though they shouldn’t have to!).

When we got Seth in September 2007, we didn’t know much about him other than that he was a big, black 7-year-old dog who needed a good home.

Here’s one of the first photos I took of him when he came to us:

Those are two pretty common guesses from other people upon first meeting Seth, too. And when we have him shaved in the summer, he looks even more like a Black Lab: 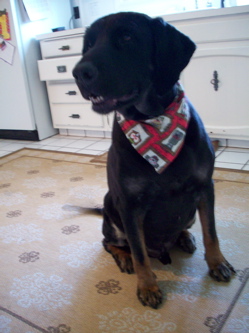 But then there are those brown paws… the wild cards when it comes to the Golden Retriever-Black Lab mix theory.

Those paws have prompted many a stranger to speculate that he has some German Shepherd in him.

But then there’s the way he walks, which I’ve been told is just like a Rottweiler.

As of last week, those were the four most common breeds that people associated Sethy with. Then someone brought a whole other breed into the mix.

I was walking Ryder and Seth in my parents’ neighborhood when I heard a guy yell something from across the street. I couldn’t make out what he was saying at first. “Excuse me?” I asked.

“Is that a Gordon Setter?” the man said louder, pointing at Seth?

Not only had this breed never been introduced as a possibility for Seth before… I had never even heard of it.

“I’m not sure exactly what he is,” I answered.

The man told me he once had a dog who looked like Seth, and the dog was a Gordon Setter. So of course I went home and Googled the breed. This is a picture of one:

I definitely see the resemblance, particularly since we keep Sethy unshaved in the winter, so he is super furry right now.

He is my silly, snuggly, gentle, goofy love bug. And to me, that’s the perfect mix.