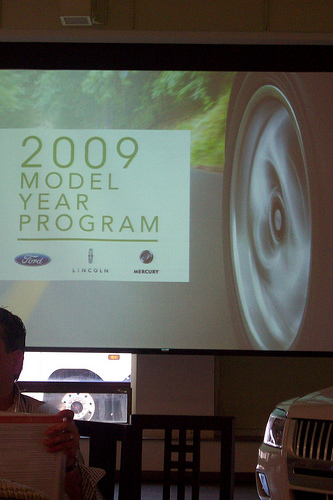 I never cease to be amazed at where this blog takes me.

The people I have met, the places I have gone, the connections I have made, the work it has brought me… this blog, my voice as a part of Mom Generations, has been an incredible vehicle.

And please forgive me that metaphor as I tell you about the latest place it has taken me – Dearborn, Michigan, to the Ford Motor Company for its 2009 Model Year media day last week.

You see, social media is a powerful thing. What we, as consumers, do and say and discuss online has become increasingly important to corporations looking to connect with their customer base. That is, the corporations that are doing it right.

Ford recently got it “right” by hiring Scott Monty to head up the company’s social media efforts. It was Scott’s idea to shake things up a bit for Ford’s media day, and not just bring in automotive reporters and bloggers (though there were plenty of them there).

It was his thought to (in his own words), “look beyond the usual suspects of auto bloggers … and to look for lifestyles – people interested in technology, environmental issues, family and luxury.”

And that would be where I come in. (And a special thanks here to Melanie “Savvy Auntie” Notkin for recommending me to Scott as an influential PANK!)

I don’t know all that much about what goes on under the hood of a car (though I know more now, after some chats with Ford engineers). I don’t particularly care about horsepower. I don’t think about the rims on my tires.

I have 2 big dogs and 11 nieces and nephews. I care about safety. And if there’s one thing I walked away with after my day in Dearborn, it’s the knowledge that the people designing and engineering Ford vehicles are incredibly committed to the safety of their customers. They devote some serious time and research to finding and developing the latest safety technologies out there.

How do I know? I actually had the chance to talk to some of the people in charge of developing and implementing this very research for Ford. They were smart, proud of their work and ready to answer any questions about it. They took us through their latest developments in air bag safety, how they apply lessons learned from race car crashes to Ford passenger cars, how they’re making crash test dummies more lifelike to better understand how injuries occur, etc.

The opportunity to discuss these things with the people who develop them was invaluable.

In addition to quality and safety, Ford is also leading the way in environmental technologies. We heard a lot about the company’s commitment to producing cars with improved fuel economy, and the company’s plan to double hybrid production in the coming year – two exciting things, for sure.

But most exciting is the new EcoBoost engine that Ford will launch in 2009 on the Lincoln MKS (with other vehicles to follow shortly). Within 5 years, this new technology will account for 20 percent better fuel economy, and up to 15 percent fewer CO2 emissions in half a million Ford, Lincoln and Mercury vehicles.

Another cool “green” feature Ford is working on is the EnviroSeat, which has been in development for about six years. We were able to take a look at the prototype of the EnviroSeat, the features of which include:

The Ford engineer who led us through the development stages of the EnviroSeat, and has been an integral part of building it? She has her Ph.D. from MIT. Very cool.

Of course, everything we learned from the development teams and people behind the technology was incredibly informative and important.

But the real fun part was getting to test drive the cars. Oh yes, this is where we were able to actually experience the features and technologies. 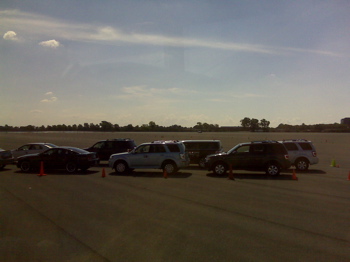 I was most excited to check out the cars with SYNC – technology that allows you to hook up digital mobile device (I hooked up my iPod) and operate it while driving, either through voice activation, the radio, or buttons on the steering wheel.

And I am officially in awe of the “next generation” of navigation Ford is introducing with SIRIUS Travel Link, which offers:

I was able to sit in the Lincoln MKS, in Michigan, and check out what the weather looked like for my flight back home to Rhode Island that night. (Thunderstorms over Buffalo, NY, by the way.)

My favorite ride of the day was the new Ford Flex. 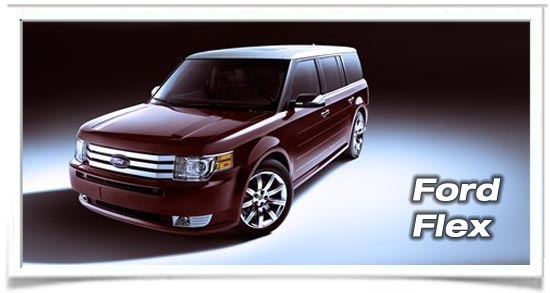 With all the things I look for in a car – safety, style, technology, environmental consideration and roominess (see previously mentioned 2 big dogs and 11 nieces and nephews) – the Flex gets my vote.

It’s a pretty big car, but doesn’t handle like one. I don’t think I even knocked down one cone while hugging the curves around the track. Now that’s steering (not to mention impulse) control. 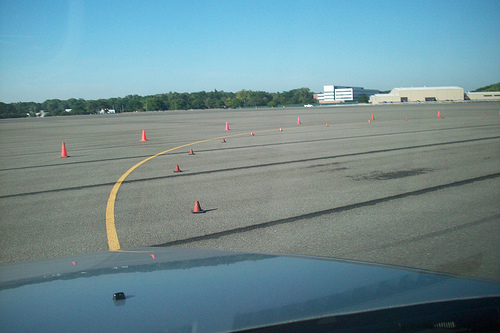 I left my day in Dearborn with a real appreciation for the people behind Ford. I am proud to have been among those invited to this event, especially as it marked the first time that non-automotive press was asked to come along.

I hope Ford saw the value in bringing bloggers with different interests and perspectives into the mix.

I have a feeling they did.

See my photos from the event here