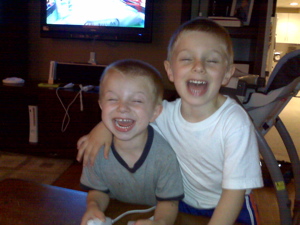 I have discussed before just how much credit I give to moms for doin’ yer thang.

I know some parents say, “People with no children just don’t get it.” But I do. Seriously.

Yes, I consider myself a mom to my two doggies. But I admit that both my dogs are pretty low maintenance. All they require is that I love them, feed them, take them on walks, play with them and make sure they’re groomed. Being their mom is all fun, all the time. There’s never any talking back, eye rolling, slamming doors or the always fun, “drop-me-off-a-mile-from-the-mall.”

As a proud PANK (Professional Auntie – No Kids, a term coined by my fabulous friend, Savvy Auntie) – not to mention the fact that our Mom Generations office(s) rotate between my house, my parents’ house and Audrey’s house – I live my Auntie role every single day. And sometimes the line between Auntiehood and Mommyhood is blurred.

Take this morning, for example, while we worked at Mom’s house. Audrey’s husband was at the gym working out, so our Mom Generations work was stalled for a bit as Audrey, Mom and I looked after Audrey’s 4 boys. Yes, there were three of us adults, but we were still outnumbered.

Audrey was upstairs multi-tasking: feeding her little guy, Henry, while trying to sort some of the products that have recently come in for review. And Mom was chasing around Audrey’s 15-month-old, Benjamin, who insisted on running outside on my parents’ back deck.

I was trying to get some work done myself, but there were PANK duties to tend to (which, of course, I never mind).

First I heard William calling me from the bathroom. “Janie!” (all of Audrey’s boys forget the “Auntie” part of my name), “I need help!” I had to abandon my laptop and go see what was up. William couldn’t reach the sink on his own. So I lifted him up to help him wash his hands, when I heard…

This time it was Alexander, calling me for help from the living room.

“Hang on, Alex!” I called, gently reminding William (whom I was still lifting up) to hurry it up and that he didn’t need that much soap. (And my gosh, at almost 4 years old, he is getting heavy.)

I put William down and told him I’d be right back. I ran into the living room to find almost-3-year-old Alex stuck in the Exersaucer.

“I can’t get out of Benja’s toy,” he told me. I lifted him out, gently reminding him that even Benjamin – his little brother – is too big for the Exersaucer now.

I went back into the bathroom to check on William, who was all set with the soap by then, but pointed out to me that there was pee on the toilet that had to get wiped up. And it was definitely my responsibility to fix that problem. (Then it was time to wash my hands.)

So then it was back to my laptop – for about 8 seconds. Audrey had come back downstairs and needed me to hold Henry for a minute. As I was cradling my little nephew, Alexander came over to me insisting that I take his hand so he could show me something. He led me back into the living room, where he again insisted that I put Henry in the baby swing. “Swing Henry!” he exclaimed.

Henry was so, so cozy in my arms, so I explained to Alex that it was just wasn’t a good time. I thought he understood. But then as I left the room, Alex continued to instruct me to, “Swing Henry! Swing Henry!” He wouldn’t give up. So I had to get his mind on something else. What always works for Alex? Food.

“How about a granola bar?” I asked him. That did the trick – but had a snowball effect.

William chimed in: “I’m hungry, too.”

“I don’t want a granola bar. I want Frosted Flakes,” he said. So I dutifully got Alex his granola bar and William his Frosted Flakes. I set them up on their little tables and chairs and headed back to my laptop. But not for long.

“Janie, there’s too much milk in my cereal!” So I went back in the living room, expecting to just have to get William a new bowl of cereal (I’m an Auntie, after all, and a bit of a pushover at that), but instead I was also greeted by itty bitty pieces of granola bar all over my parents’ Oriental rug.

“Alex, what did you do to your granola bar!?”

Without batting an eye, Alex told me, “It’s sticky, Janie.” And by that, he apparently meant that it was sticking to his fingers, and therefore he had to take it all apart to eat it. Except that practically none not all of the pieces went into his mouth.

As I was on my hands and knees picking the sticky granola bar pieces off the floor (again, I’m a bit of a pushover PANK), Audrey and Mom finally came back from their duties elsewhere, and were able to help me out with kid duty.

All I can say is, next time the line between Auntiehood and Mommyhood is going to be blurred, I will prepare my laptop for my absence.

A morning in the life of a PANK was last modified: July 28th, 2017 by Jane Couto Govednik
SHOWHIDE Comments (15)

A morning in the life of a PANK was last modified: July 28th, 2017 by Jane Couto Govednik