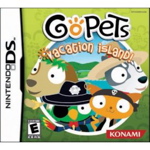 I grew up with two dogs. Cracker and Carmel. They were not only my best friends, they just happened to be the best dogs in the world. Loyal. Cuddly. Smart (well, we knew that Carmel was brilliant.  But Cracker was downright gifted!). And SO adorable.

But… there’s something about having 4 boys (all under 4) right now AND adding the care of a puppy that makes me say, “Not right now.”

I just don’t think I can handle it. Much (much, much) to the chagrin of my boys.

So… I did what any mom “could” do in my situation. I bought William and Alexander Webkinz puppies.

Then I heard about GoPets Vacation Island for William’s Nintendo DS Lite. The little man loves video games. And he wants a pet. So I thought, “Perfect!”

And perfect it is.  GoPets Vacation Island is an amazing virtual pet game. We were actually able to create our own pets and let them travel the world, make and visit friends, and make sure they eat, bathe, dress and sleep.

GoPets Vacation Island is literally the coolest world. When you first enter, you decorate island locations, set-up a home in a Bungalow and meet “Island” people.

There’s even a special picture language that GoPets communicate with – it’s called “iku.” William loves touching the pictures on the screen to read them, and get them translated to “our” language.

And then there’s the Adoption Center. Oh yes, where you can adopt pets.

We chose to use the Pet Matching Service where I helped William answer questions so that the game would match William with a pet personality close to his.

From the six personalities – Explorer, Victorian, Nature-Loving, Fashionista, Party-Loving and Quiet… William was given a pet with a personality just like his  – Explorer.  (I think my pet would be the Fashionista!)

And guess which pet William chose?

Well, a pretty easy choice for him… a DOG!

(Repeat: I think mine would be the Fashionista!)

William is a little too young to really grasp more of GoPets… but I think it is a great alternative to Webkinz. The very cool part is that there is a social networking piece to GoPets.

I wouldn’t want to GoNuts right now with a real dog… but for the time being,  GoPets and William are a nice fit.

And some day I will introduce our “real” dog to our little “Explorer” pet!